Massad Ayoob Checks the Accuracy of My Handgun

On handguns, slide stop levers, magazine releases, and safety/decockers are typically on the left side of the gun, to be operated by the thumb of the right hand. Consider the wildly popular Glock line. There is no manual safety on the gun, but the slide stop is on the left side and it was not until the 4th generation of the gun that a reversible magazine release became available. As a lefty, I am used to developing all sorts of workarounds in a right-handed world, and the gun I shoot most is in fact a Glock 17.

But I did alot of research to try to find a fully ambidextrous handgun and landed on the FNH USA FNX-9. The picture below of the right side of the FNX-9 nicely shows the lefty friendly controls.

I got the gun without having shot it before, based on the controls and generally positive reviews I read. Unfortunately, compared to the Glock 17, I could not shoot the FNX-9 as accurately. I read more reviews of the FNX-9 and saw some buzz about different sight pictures and modern handguns being fitted with “combat sights” and so on. (Although not about the FNX-9, see this example.)

This raised the possibility in my mind that there could be an issue with the gun’s sights. Maybe it shipped from the FNH USA factory with bad sights? When I took a course with Massad Ayoob recently, this idea was reinforced. Mas tests alot of guns and mentioned during our class that he was once sent a gun from a major manufacturer that was shooting some 6 inches off at 25 feet because the manufacturer put the wrong sights on the gun at the factory. Ah ha! My theory confirmed! The FNX-9 sights were certainly bad. All I needed was to have Mas shoot the gun to confirm this. I imagined myself on the phone with FNH USA customer service telling the skeptical agent, “I KNOW the sights are bad because I had MASSAD freakin’ AYOOB test the freakin’ thing. OK?!”

Back to reality. At the end of the long 5 day course, Mas was good enough to take some time to go back out to the range with me to shoot the FNX-9 to see if the sights were misaligned. 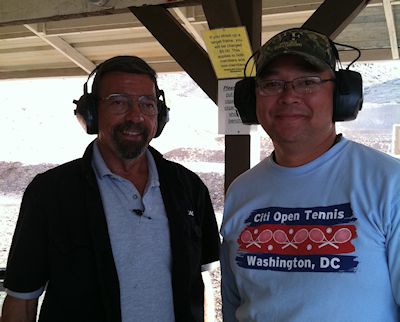 About 7 yards down range, we put up a standard IPSC target – a plain brown cardboard with no visible points of aim on it. Mas took aim with the FNX-9 and put the first shot in the center of the target. He paused momentarily to look at the hole. He took aim again and put a second round . . . through the same hole.

He set the gun down and said plainly, “The sights are fine.”

And I had to confront the harsh reality of my own limited ability as a shooter.