In my first post reflecting on my first experience at the NRA Annual Meeting and Exhibits I focused on pro shooters. In this post, I highlight experiences with “shooting stars” — shooters who are notable as TV personalities.

Other “Top Shot” alumni I saw at the NRA meeting were Season 1 winner Ian Harrison (now editor of Recoil magazine) and Season 3 winner Dustin Ellerman, as well as Brian “Gunny” Zins representing Cabot Guns (Seasons 2 and 5), Michelle Viscusi now a member of Team Glock, and J.J. Racaza who was at the Armscor/Rock Island Armory booth — 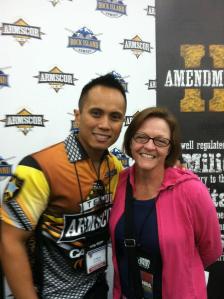 Of the shooting stars that I actually spoke to, all seem to be regular guys and gals who seem humbled by the fact that people actually know them and appreciate what they do.