Dealing With Active Shooters at My Workplace

I was surprised this morning to receive an email from work about testing a new indoor emergency alert system on campus that will include messages not only about tornadoes and threatening weather, but also about “an active shooter” or “an armed intruder.” 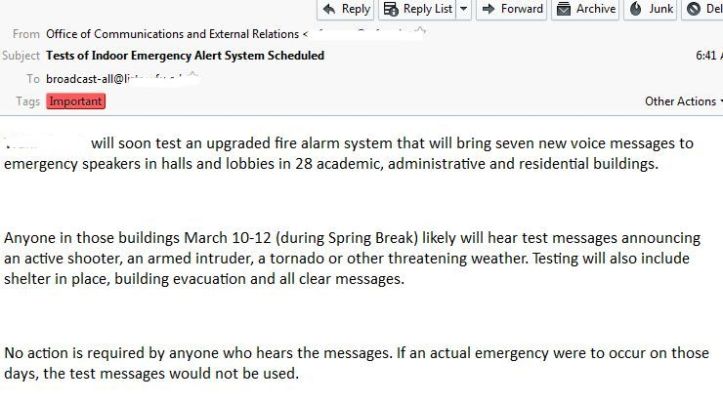 I was surprised because there has been no previous mention at my workplace of active shooters and how to handle them in any public forum I am aware of.

We did see signs posted around campus last fall noting that the carrying of concealed weapons on campus is forbidden, so armed intruders are definitely forewarned. And our president is among those who have joined the call by “College Presidents for Gun Safety” for enactment of tougher gun control laws.

Despite the fact that some of the worst and most high profile mass murders have taken place on university campuses — Virginia Tech (32 killed, 17 injured),  Northern Illinois (5 killed/21 injured in 2008), all the way back to 1966 at the University of Texas (16 killed/32 injured) — my campus seems very unprepared for this possibility. According to a January 2013 story in the Huffington Post, we are not alone. And among President Obama’s directives on gun violence following the Sandy Hook shooting was for college campuses to be better prepared (not linking to the White House site on this because it keeps crashing my browser!).

So, perhaps this test of our emergency alert system is in part a result of the realization that we are not prepared for an active shooter event. The email I received said that the test “will also include shelter in place, building evacuation and all clear messages.” But no one has advised us on what sheltering in place or evacuating entails. For me personally, I will use the “Run, Hide, Fight” strategy.