As I noted in a previous post, there is no definitive history of the fall and rise of concealed carry in the United States. (Please correct me if I am wrong.) We do have some good partial histories, notably Clayton Cramer’s book Concealed Weapon Laws of the Early Republic. To this I would add Brian Anse Patrick’s (unfortunately named) book, Rise of the Anti-Media: In-Forming America’s Concealed Weapon Carry Movement. 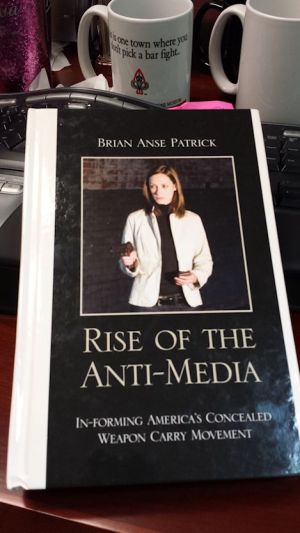 The main title of the book reflects Patrick’s training as a communication scholar and his interest in the way “anti-media” — “new computer-mediated or computer-assisted practices and technologies of communication” (p. x) — both inform and form the concealed carry movement as a more or less equal community.

Although Patrick is not primarily concerned with writing a comprehensive history of the concealed carry movement, he is interested enough that a thorough reader is rewarded with some important historical observations, as well as some more general points of interest.

Patrick picks up the story of restrictions on concealed carry where Cramer leaves off. From the 1850s until the “shall issue” movement of the 1970s and 80s, restricted carry was the status quo in America. Hence, Patrick calling this the “restricted era.”

During this time, laws banning concealed carry spread from the Southern states studied by Cramer throughout the country. A highly influential model for the restriction of concealed carry in the Northern states in the early 20th century was New York’s 1911 Sullivan Act, which required a license to possess and carry a pistol. In effect, where concealed weapon carry was allowed at all, it was typically permitted under a discretionary system. In contemporary parlance, these are called “may issue” laws, like that currently in place and being challenge in California:

California Penal Code Section 26150.  (a) When a person applies for a license to carry a pistol, revolver, or other firearm capable of being concealed upon the person, the sheriff of a county may issue a license to that person upon proof of all of the following:

As one might expect, “good” character and “good” cause are highly subjective, and in many cases (as I wrote about San Francisco) no cause is good enough for an ordinary citizen to obtain a license. As Patrick argues, “good character” was often a euphemism for being a celebrity, rich, and/or politically connected.

That these gun control measures were being passed at the state level is significant, since the level of professionalization of state legislatures has not always been high. Indeed, one observer wrote in 1906 that “the state legislatures are not high-toned bodies” (James Bryce, The American Commonwealth). (Shameless self-promotion: see my earlier book about religion and state legislative politics.) Efforts to professionalize state legislatures included a movement toward the standardization of state laws in general (see, e.g., the National Conference of Commissioners on Uniform State Laws). Consequently, from 1923 to 1927 a number of states adopted restrictions that were based on a model called the Uniform Firearms Act, including: California, North Dakota, New Hampshire, Michigan, Connecticut, New Jersey, Rhode Island, Massachusetts, Hawaii, and Oregon (p. 8).

Patrick notes that these early gun control measures were supported by “traditional gun culture” — hunters, target shooters, and sporting firearms owners — and their voluntary associations like the United States Revolver Association and the National Rifle Association. “Traditional gun culture… saw no problem whatsoever with outlawing general concealed carry or with requiring purchase permits for handguns. As long as the interests of target shooters, sportsmen, and ‘reputable’ members of the public who wanted firearms for home or self-defense were preserved, all was good” (p. 13).

Although written in a universalistic language, these restrictions were powerfully motivated by racism, xenophobia, and class bias. In Patrick’s words, “What discretionary systems provided in this low information environment was a system where the masses, the undifferentiated nobodies comprising the working or lower classes, or marginal races, or those beyond the known limits of civilized society were excluded by subjecting them to virtually unattainable levels of proof to establish need. . . . The ‘need’ in these need-based licensing systems really translates as ‘personhood’: the respectable, the propertied, the most viable nodes of the social network. The wisdom of the system was that it was exclusionary in the desired direction, while at the same time appearing fair and uniformly objective in its mechanics” (p. 32)

In the end, the process begun in the early 1800s was largely completed by the 1930s: “legal concealed gun carrying in most American states had become a privilege of the few” (p. 37). This situation held, supported by traditional gun culture, until a new gun culture was energized to challenge the status quo beginning in the 1970s. The end of the era of restricted carry was the result of this pro-concealed carry social movement. For more of Patrick’s view of this, see Part 3 of this story (forthcoming!).