Exploring the Connection between Religion and Gun Ownership in the 1970s

After a month-long hiatus in August to string tennis rackets, visit family, and get the fall semester started, I am back to work examining American gun culture. At the end of October and again in November, I will be presenting research to the Society for the Scientific Study of Religion and the American Society of Criminology on the relationship between religion and gun ownership in the United States.

So, I have begun reading the scholarly literature on the topic and hope to throw a few posts up here about what I am finding as I go. I begin with one of the first sociological studies of gun ownership based on nationally-representative survey data and published in a peer reviewed journal.

Using data from 1973 General Social Survey, Wright and Marston paint a descriptive picture of who owned guns in American society in the early 1970s. They used two questions:

They find that 47% of American households report having at least one gun in it, and 20% have a handgun. The 47% gun ownership figure was consistent with survey results (citing Gallup) back to 1959.

A key descriptive table from this paper highlights some of the many demographic correlates of gun ownership. (The authors also use multivariate statistics to isolate key causal factors, but for simplicity I do not reproduce that here.) 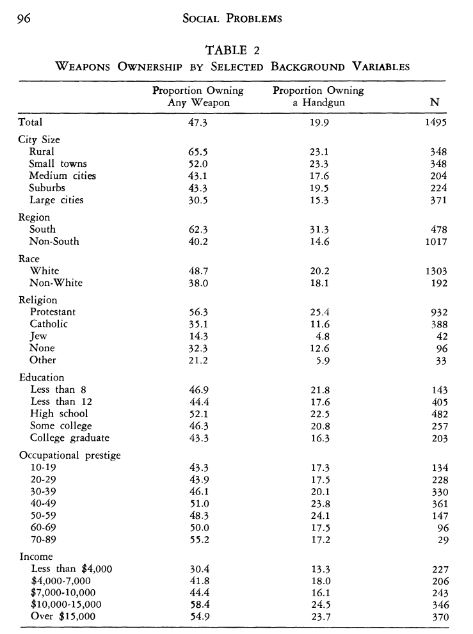 Income and occupational prestige were also positively and linearly related to gun ownership making gun ownership in general a middle-class rather than a poor or working class phenomenon.

This also applied to ownership of handguns: Protestants (25.4%) were more than twice as likely as any other religious group to own handguns (Catholic = 11.6%, Jew = 4.8%, None = 12.6%, Other = 5.9%). (Note: This Protestant difference is statistically significant in multivariate statistical models.)

The authors do not have data to explain WHY Protestants are more like to own guns, even after controlling for other demographic characteristics. They do offer some speculation, however, such as seeing guns as representing a commitment to the “American Way of Life,” and especially to the spirit of independence that characterized the American frontier.

I am hopeful that later studies of the relationship between religion and gun ownership can help to unpack this empirical connection in greater detail, and I have some thoughts of my own on this issue that I hope to share later. Stay tuned.