Not exactly a timely post, but I went to the National Press Club in Washington, D.C. in August to attend the Students for Concealed Carry National Conference, co-sponsored by John R. Lott, Jr.’s Crime Prevention Research Center. I overhead someone say that there were 70 individuals preregistered, but my rough count (including organizers and presenters) was about 50 people.

Although the conference was just half a day (12p-4p), the agenda was full and diverse. The speakers mostly stayed focused and kept to time, so the conference actually wrapped up early. (I skipped the Leadership Institute workshop on campus activism at the end.) My summary comments on what I experienced follows.

The opening speaker characterized Students for Concealed Carry as a non-partisan group, but it is strongly motivated by the conservative to libertarian political ideology. The Leadership Institute (http://www.leadershipinstitute.org/) – “training conservative activists, students, and leaders since 1979” – co-sponsored the event and offered a training session immediately following the conference. Suffice to say, I don’t suppose there were (m)any Democrats in the room.

First up was a panel on “Women and Victims and Gun-Free Zones on College Campuses,” with Taylor Woolrich (Dartmouth), Alexandria Lainez (formerly of University of North Florida, now at Florida Atlantic U), Holly Adams Sherman (who lost her daughter in the Virginia Tech massacre), and Nicole Goeser (about whom I wrote previously).

Woolrich told the story of being stalked and having a restraining order against her stalker but not being able to defend herself otherwise. Lainez was lead plaintiff with Florida Carry in a case against North Florida which banned her from carrying a firearm in her car in the school parking lot. Although she subsequently won her case, she was a victim of sexual assault while the case was being tried. She offered the unique perspective of an advocate who became a victim. Her conclusion: “You are your only protector.” Adams recounted the anguish of losing her daughter and emphasized one conclusion she drew from it: If only someone in that building had a gun and could have stopped the massacre of 32 innocent lives at Virginia Tech. Last, Goeser told her story and asserted in conclusion the basic human right of self-defense.

The second panel was a debate between John Lott and Chelsea Parsons, Director of Crime and Firearms Policy at the Center for American Progress. Kudos to her for stepping into the lion’s den. 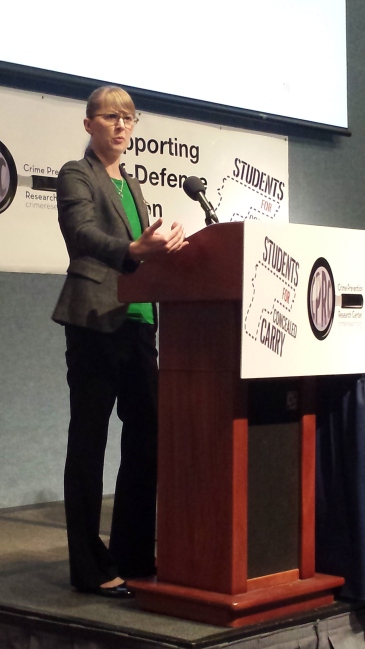 Lott’s take was as expected: more guns = less crime. Concealed carry holders are very law abiding and places (like bars and banks) that allow firearm carry do not see particularly high rates of gun crime associated with legal carriers. Therefore, there is no particular need to fear college students legally carrying firearms. In the few places where students can carry on campus, there have been no reported problems. Gun-free zones are the places that maniacs target for their mass killings.

Parsons began her talk by offering an olive branch of sorts, asserting that both sides in the gun debate have the same goal — safe communities and safe campuses. She says the two sides have more in common than differences. Among her major points are concern with the low level requirements for getting permits in many states – minimal training or places where there are no permit requirements or places where you can get a permit with a criminal record (e.g., misdemeanor stalking, DUI). She also highlighted the confusion that could ensue with law enforcement officers trying to distinguish between the “good guy with a gun” and the “bad guy with a gun” in a situation on campus. Parsons also cited the risk of escalation of common student fighting to a fatal outcome. Finally, she also noted that public opinion (including college leaders) strongly opposes gun carry on campus. Cites survey data that people under 30 are less likely to own guns today than in the 1970s, and their attitudes toward gun ownership show many young people feel safer in places where there are no guns.

Lott’s rebuttal to this was basically, “show me the data.” Parsons cited POTENTIAL problems while Lott reiterated the ABSENCE of actual problems involving permit holders.

Parsons challenged Lott’s use of permit revocations as a measure of problems with permit holders, since in some states it is difficult to revoke a permit. (She does allow that most permit holders and gun owners are law abiding citizens.) She also mentioned that violent crime on college campuses is very low, highlighted the lethality of suicide attempts using firearms, and cited Everytown data maintaining that only a small portion of mass shootings take place in gun free zones.

Third up was Tom Palmer, a libertarian and senior fellow at the Cato Institute who holds a doctorate in politics from Oxford University. Palmer has a personal experiencing using a firearm for self-defense against an attack that he believes was motivated by anti-gay sentiments (he being openly gay). Because of this, he was approached to be a lead plaintiff in a case challenging the District of Columbia’s ban on carrying firearms outside the home, which became Palmer v. District of Columbia. A federal judge in DC ruled in this case recently that DC’s ban on carrying firearms outside the home is unconstitutional, making it the legal extension of the Heller decision in 2008.

Next was an “academic studies” panel with Joyce Lee Malcolm (Patrick Henry Professor of Constitutional Law and the Second Amendment at George Mason) and Carl Moody (Professor of Economics at William and Mary). Craig Pirrong (Professor of Finance at University of Houston) was a no-show.

Malcolm asserted that the core of the Second Amendment is the personal right to self-defense, the most fundamental right human beings have. Citing Blackstone: it is a fundamental law of nature that cannot be taken away by the law of society.

Moody began by highlighting the high rates of homicide in the 1200s — when the whole world was a gun-free zone — and the decline since then. (Except the gun free zone part, this resembles Stephen Pinker’s argument in The Better Angels of Our Nature.) Moody identifies as a turning point the 16th century when the homicide rate dropped by more than half compared to the previous century. What changed? He argues that it was the introduction of certain types of firearms, especially hand held firearms.

Although a law enforcement trainer, Morgan doesn’t really speak from that perspective. Instead, she speaks generally as a gun advocate. As a veteran public speaker Morgan is a sort of quote/cliche machine. For example, she observes that “it’s better to have a gun and not need it, than to not have a gun and need it.” She also boiled the politics of guns down to its essence in saying, “America’s obsession with guns is not about guns, it’s about liberty.”  The Second Amendment exists to protect the rest of the Bill of Rights. The right to defend life is a basic human right, and you cannot defend it or anything else without arms. And so on.

Sheriff Cannon is a good southerner, down to the seersucker suit jacket, and meandered about for a period of time offering his thoughts on a variety of issues, some relevant to concealed carry on campus and many more not.

Derek DeBrosse is the attorney representing Students for Concealed Carry in its suit against Ohio State University. One of his most interesting comments was that in the “Post-Heller” world there is a fertile ground for people interested in this issue to get involved in the law since very few people in most legal bars know much about guns.

LaFontaine, the youngest state legislator in Michigan, was involved in the passage of a campus carry law in Michigan that was subsequently vetoed by the governor. She encouraged attendees to work to break the stigma and change the perception people have about carrying guns on college campuses.

Oda is an NRA certified firearms instructor and involved in requiring state universities in Utah to allow concealed carry (and currently working on open carry on campus). He defended Utah’s classroom only requirements for a concealed carry permit, saying that proficiency with a handgun should not be a prerequisite for self-defense.

The final speaker was Kimberly Shepherd, a third year student at the Cooley Law School in Michigan, who also has a PhD in higher education and teaches at a community college in Michigan. She noted that as a professor and law student most of the day she is disarmed. And yet, as a professor, she has relationships with some students who are crazy and who may have reasons to be hostile.