The National Rifle Association, Gun Politics, and Gun Culture in 1929

I love looking at old gun magazines, catalogs, and other publications. They give us a direct window onto the past in a way that written histories do not. Of course we need to understand that magazines are published by particular people for particular purposes and so are not simply mirrors of reality. But looking at old magazines themselves does mitigate against our tendency to interpret the past largely in terms of our present concerns or beliefs (a.k.a., “presentism” or the fallacy of nunc pro tunc, “now for then”).

In my effort to document the shift in the core of American gun culture from hunting and target shooting to self-defense — i.e., from Gun Culture 1.0 to Gun Culture 2.0 — I have been accumulating one copy of the NRA’s American Rifleman for every year from the 1920s to today. The oldest issue I have so far is from December 1929.

Thumbing through this issue, a few things immediately stood out to me. The first three full advertisements are all for ammunition, and each highlights the successful use of particular brands of cartridges (Peters, Western Lubaloy, and Winchester Precision) in major target shooting competitions like Camp Perry and the International Police Pistol Team Championships. The fourth ad is for Colt’s revolvers and mentions their success in the United States Revolver Associations target shooting matches.

Of 32 total ads in the magazine that related to guns (excluding a great ad for Old Gold cigarettes, “change to OLD GOLD in kindness to your THROAT”!), only 1 mentioned the self-defense use of guns. In the ad shown below, Smith & Wesson boldly declares: “Self defense is the inalienable right of every man whether his aggressor is human or beast.” So, self-defense has always been a part of American gun culture, but not the major selling point until more recently. The ads surrounding the S&W ad below are more typical of the time. Note also that the S&W ad also references carrying your personal weapon “on your next hunting or fishing trip,” not “on your next trip to the grocery store.”

A second feature of the 1929 issue of American Rifleman that caught my eye was the NRA’s editorial, “Merry Christmas — and Gun Laws.” Hopefully you can click on the photo and it will appear large enough for you to read the entire text, which is fascinating. What is interesting to me is to read the editorial in light of the common characterization of the NRA as being a moderate, even pro-gun control organization in its early days (supporting “common sense” gun control measures), and only becoming a more hard line anti-gun control organization in the past 40 to 50 years.

The editorial begins by observing that December “may be the month for the friendly changes of gifts at Christmas time, but it is the month in which the shooter is likely to have handed to him a few gifts that he is not at all happy to receive, in the shape of restrictory firearms legislation.”

Among the forms of gun control the NRA opposed at the time: “We are unalterably opposed to any law requiring a main to obtain a permit in order to purchase a gun or to keep it in his home or place of business, and we are opposed to regulation requiring ‘mugging’ and finger-printing for honest citizens, the same as is done in the case of criminals.” Remember, this is not Wayne LaPierre or Charleton Heston speaking here. 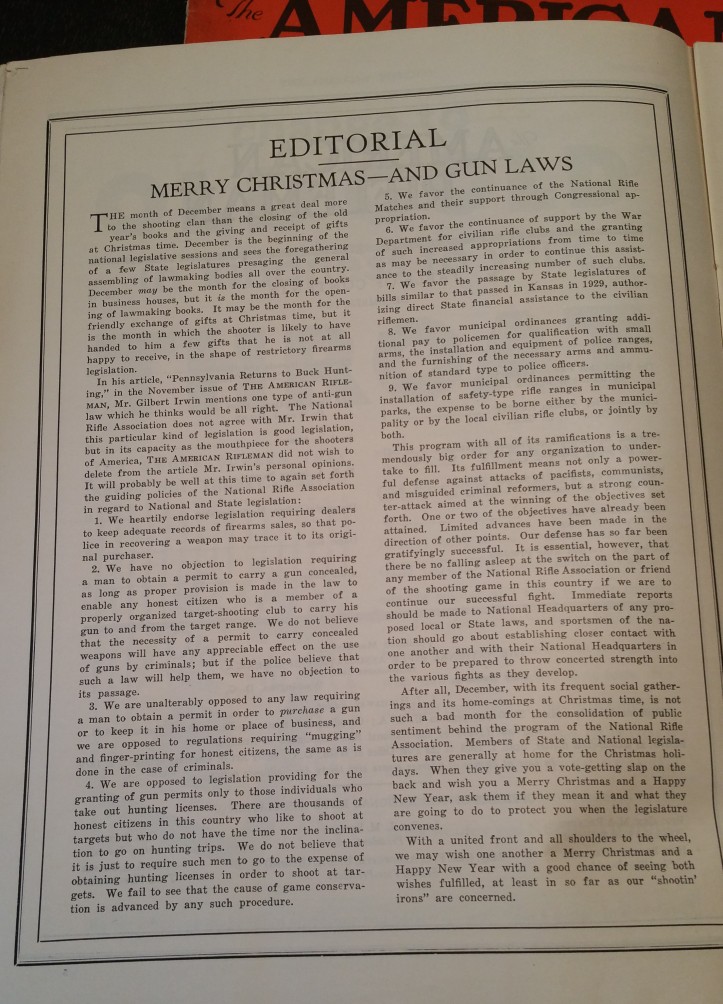 Concerning one of my main interests, concealed carry, the NRA takes the following position: “We have no objection to legislation requiring a man to obtain a permit to carry a gun concealed, as long as proper provision is made in the law to enable any honest citizen who is a member of a properly organized target-shooting club to carry his gun to and from the target range. We do not believe that the necessity of a permit to carry concealed weapons will have any appreciable effect on the use of guns by criminals; but if the police believe that such a law will help them, we have no objection to its passage.”

Here the position of the NRA has changed since 1929, but perhaps in a more evolutionary than radical way that many presume. No mention is made here of the discretionary (i.e., discriminatory) nature of permitting at the time. The NRA perhaps assumed that any upstanding, law-abiding person would be able to get a concealed carry permit, something that the gun rights movement later came to see as false.

A second section of interest is “The Dope Bag.” In it, three experts answer questions submitted by readers. Lt. Col. Townsend Whelen handles rifles and big-game hunting, Capt. Charles Askins takes shoguns and field shooting, and Maj. J.S. Hatcher is responsible for pistols and revolvers. As can be seen in the photo below, American Rifleman describes this as a “free service to target, big game, and field shots.” Already this suggests that defensive shooting is not core to the issues addressed in this section of the magazine.

In the December 1929 issue, answers to 12 questions are given over 5 pages of 3 column text. Only one of these concerned the self-defense use of guns, and the response was quite brief. Hopefully the photo below is clear enough that you can read the text of the question and answer yourself. Of note is Maj. Hatcher’s preferring the greater “moral effect” of the .25 Automatic Colt to the .41 Derringer. 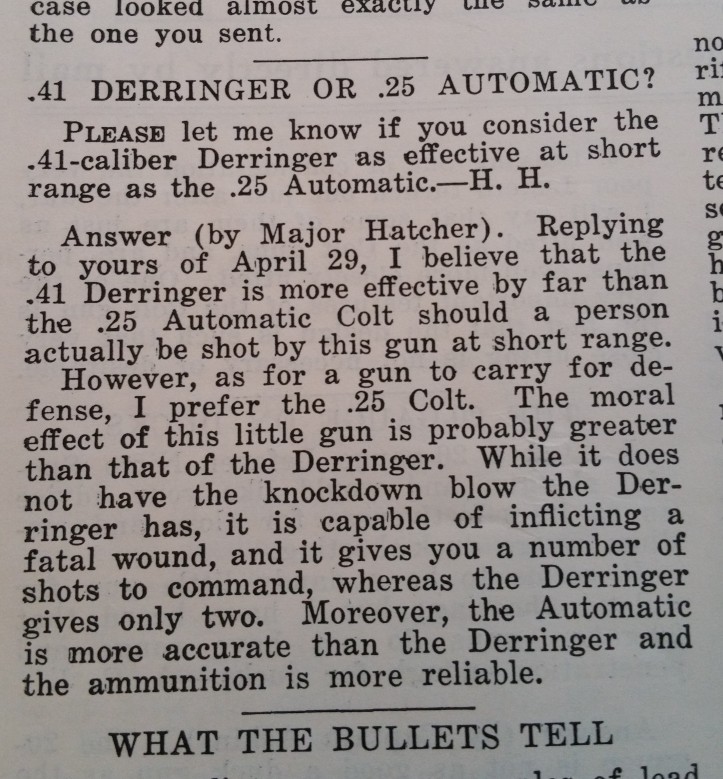 In the end, reading this 1929 issue of American Rifleman reinforces my sense that self-defense has always been a part of American gun culture, but it was nowhere near as central then as now. We have indeed seen a shift from Gun Culture 1.0 to Gun Culture 2.0.