I am working hard these days on a paper I will be presenting at a symposium on “The Symbolic and Material Construction of Guns” at Amherst College this March. The title of the paper is: “‘The First Rule of Gunfighting is Have a Gun‘: Technologies of Concealed Carry in Gun Culture 2.0.”

The first part of the title is a quote from gun writer Mark Moritz. I was toying with the idea of titling the paper “Carry Your Damn Gun,” quoting gun trainer Tom Givens of Rangemaster. But since Givens says he is just paraphrasing Moritz, I thought I would acknowledge him, too. 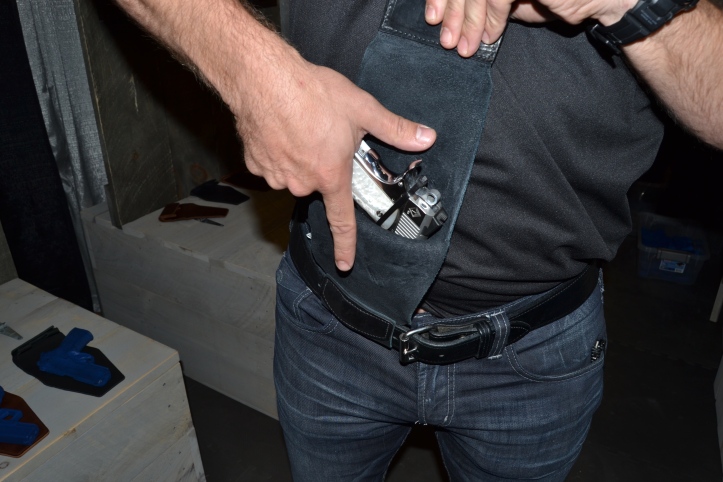 In the paper I approach Gun Culture 2.0 as a culture, thinking about it in a way that recalls the origins of the term “culture” itself, from the Medieval Latin culturare – to tend or to cultivate. Put briefly, “Culture, in this sense, amounts to ways of taking care of things.”[1]

I examine gun culture in this particular paper by focusing on guns and gun-related accessories as cultural objects created for specific purposes, frequently to address the challenges of concealed carry. They respond to and facilitate cultural practices of gun carrying which are central to Gun Culture 2.0. Because the first rule of gunfighting is have a gun.

Of course, this is easier said than done. Consequently, a large segment of the “Gun Culture 2.0 Industry” focuses on developing technologies into products that will help solve the practical problems of carrying a concealed firearm in public. Specifically, how to carry a handgun on or about your person that provides sufficient firepower and can be concealed comfortably, safely, and accessibly.

In my paper, I examine various guns and gun-related accessories as objects of material culture, technologies developed by companies small and large into products like guns, holsters, clothing, and bags which are sold to the public as commodities in venues like the United States Concealed Carry Association’s Concealed Carry Expo and the recently announced National Rifle Association Personal Protection Expo.

An important part of the CCW equation, of course, has to do with the “W” — the weapon. Smaller guns are easier to conceal and carry, but this benefit is bought at the price of “stopping power” — both caliber and capacity. Gun manufacturers try to negotiate these trade-offs in their gun designs as concealed carry consumers try to identify the ideal gun for them.

While I was trying to find the specs of a gun I was writing about, I came across an interesting website called WhichGun.com, which markets itself as “Your Complete Firearms Buying Guide(tm).” What caught my attention was within this site it has a rating system called “Concealed Carry Factors(tm)” which incorporates two central aspects of any gun’s physical specifications. Quoting the Concealed Carry Factors page of the WhichGun.com website:

Concealability Factor™ is a measure of how easily a handgun is concealed. Overall length, width, height, and weight all come into play here. Some of these specifications are more important than others — for example, a small change in width can make a very large difference in the concealability of a handgun, while a change in overall length does not, since a long barrel or slide simply extends further down the thigh of a person using an IWB (inside-the-waistband) holster, the most common method of concealing a handgun. Width and weight are the two most important specifications for concealbility, and a relatively small difference in width or weight will quickly lower the Concealability Factor™ of a handgun. Changes in height, or grip length, will not affect a handgun’s Concealability Factor™ as much as width or weight, and changes in overall length has the least effect on this rating.

Firepower Factor™ measures handguns’ effectiveness for self-defense. The caliber a handgun is chambered for, and the number of rounds a handgun can hold, is used to calculate this datapoint. More powerful calibers, like .45 ACP and .357 Magnum, will give a handgun a higher rating than less powerful calibers, like .380 ACP and .38 Special. A larger magazine or cylinder capacity will also result in a higher rating for that firearm. Many firearms are available in more than one caliber, so for these models, a separate Firepower Factor™ is calculated and displayed for each version.

These two factors are then combined to calculate a gun’s “CCW Factor™ (Carry-Capable Weapon)”:

The CCW Factor™ for a handgun takes everything into consideration: overall length, width, height, weight, caliber, and capacity. This gives you a single number that shows each handguns’ suitability for concealed-carry usage, freeing you from the tiresome task of manually comparing the specifications of a dozen or more handguns in order to narrow down your list of choices. Smaller and lighter handguns with a larger caliber and capacity will receive a higher CCW Factor™ than larger and heavier handguns with a smaller caliber and capacity.

The website is very easy to navigate. You can view guns by manufacturer, or you can sort the list by name, price, rating (by users of the website), or CCW Factor. The top 3 CCW Factor semi-automatic pistols according to this system are the Kel-Tec P-3AT, Diamondback DB380/DB380N, and the Ruger LCP .380. 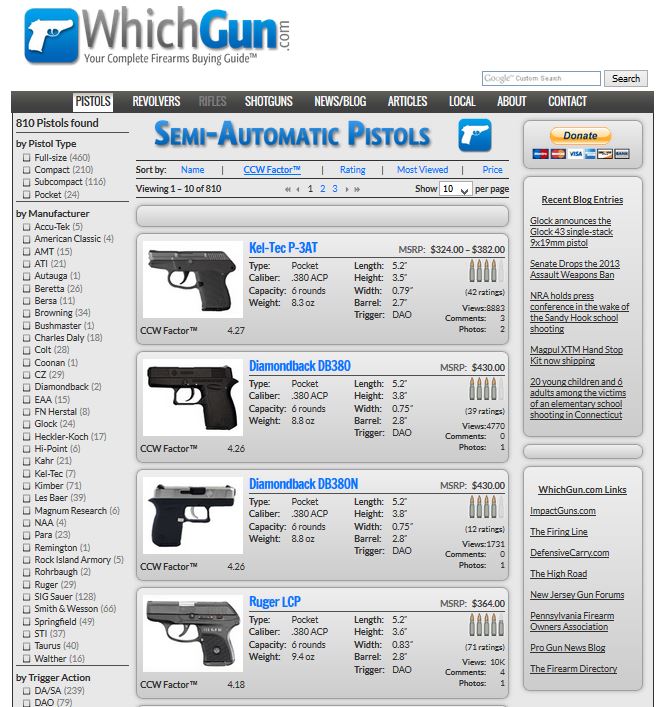 A gun I am particularly interested in comes in 7th on the list, just behind the Smith & Wesson Bodyguard .380 and the Rohrbaugh R9. The Kahr P380 has an overall CCW Factor of 4.09 (out of 5), composed of a very good Concealability Factor of 4.40 and a weaker Firepower Factor of 3.17, which demonstrate the trade-offs inherent in choosing a gun for concealed carry.

Unfortunately, it appears from the absence of recent blog postings (last one in March 2015) and of recent subcompact 9mm handguns (e.g., no Beretta Nano) that WhichGun is not being updated anymore. A link on the site seeks donations, so I imagine the site’s creator might not have been able to monetize his effort.

The site, of course, is suggestive not definitive (and the site admits as much). One important factor that is left out of the CCW Factor equation is shootability. A handgun that maximizes both the Concealability and Firepower Factors can be a bad recipe for disasters like missing your target, being slow on follow-up shots, and shooter-induced malfunctions. Although it is too recent to have received a CCW Factor rating, I found this out when I tried to shoot the Heizer Defense PKO-45 — a 0.8 inch thick semi-auto chambered in .45 ACP with a 2.75 inch barrel.

It would be good to combine the strictly quantitative metrics of WhichGun’s CCW Factor with the slightly more subjective but still quantified metrics of Midway USA’s Larry Potterfield. Viewers of Outdoor Channel’s “The Best Defense” will be familiar with these segments/commercials. The Midway USA system takes into consideration (1) time to first hit, (2) accuracy, and (3) knockdown factor.

Their Rate Your Concealed Carry Handgun website not only explains the system but also allows you to plug in the scores you achieve shooting your own handgun to generate a total score.

Midway USA’s concealed carry handgun rating system, however, does not factor in concealability alongside shootability and firepower. Consequently, the top rated gun listed on the Midway USA site is the .40 caliber Glock 22. At 8.03″ x 5.43″ x 1.18″, this full-size duty weapon is not the easiest gun to conceal and carry comfortably everyday.

As always, the bottom line is trade-offs.