My posts on gun ownership statistics, beginning here, brought out a number of excellent comments, some of which highlighted that others have made the same or similar points in the past. Teaching on this topic and posting about it has, therefore, been very educational for me. Which is a big part of the point of doing this, after all.

I teach and write about guns not because I ALREADY know everything there is to know about them, but because I WANT to know more about them.

As before, I want to bring some ideas shared with me out of the comments and into the main text here.

@BostonTea84 reminds us of the Zogby Analytics poll in 2015 that asked: “If a national pollster asked you if you owned a firearm, would you determine to tell him or her the truth or would you feel it was none of their business?”

@BostonTea84 reports the finding that “36% of Americans feel it is none of the pollster’s business and that includes 35% of current gun owners 47% of Republicans and 42% of Independents.”

The large number of respondents who answered “none of their business” and characterized themselves as “former” gun owners (yeahhhhh, riiiight) is suggestive of under-reporting of gun ownership even in this Zogby poll.

These results are striking, indeed, though it is important to note that the sample for this online survey was composed of “likely voters” not all Americans. 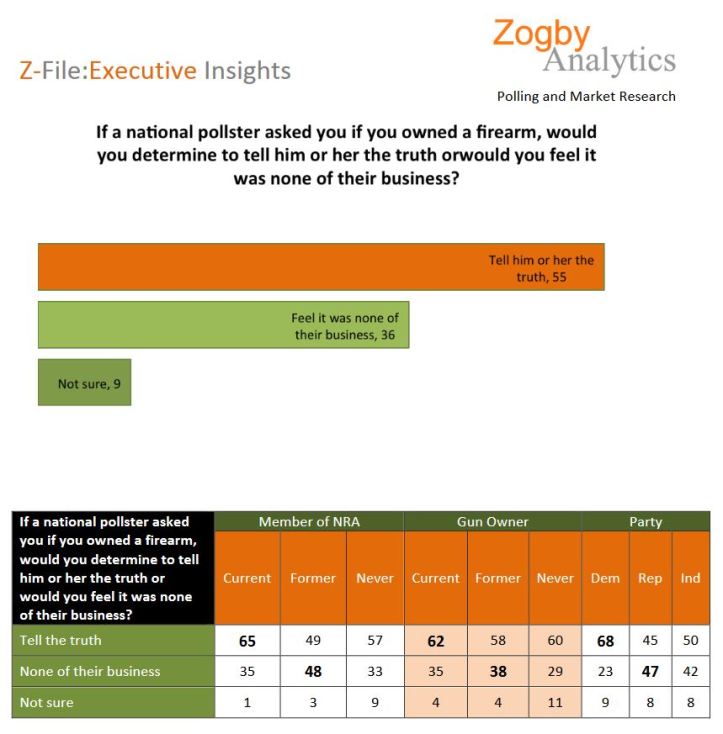 @BostonTea84 also noted that my criticisms of Kellerman and Rafferty and colleagues were already made by Gary Kleck and Michael Hogan nearly 20 years ago, in a 1999 article in the journal Social Problems:

“Kellermann carried out a small-scale local check on the validity of responses to survey questions on gun ownership using lists of registered gun owners, a group who, by definition, had already shown themselves willing to let strangers (the legal authorities) know that they owned guns. Results indicated that even among this presumably candid group of gun owners, 11.4 percent of the known owners denied having a gun in the household, some claiming that they used to own guns but no longer did so, even though all of the sample members had registered handguns just 30-90 days earlier, while one even denied ever owning a gun (Kellermann et al. 1990). In a similar study, Rafferty and her colleagues (1995) found that 10.3 percent of hunting license holders and 12.7 percent of handgun registrants denied household gun ownership in interviews. Thus, 11 percent would seem to be a conservative estimate of the level of false denial of gun ownership to be found among gun owners. Among the residents of the high-crime areas from which the case-control samples were drawn, the denial level would almost certainly be higher.”

Not surprisingly, John Lott has also been critical of gun ownership polls for underestimating levels of gun ownership. In his recent book, The War on Guns, Lott also cites data on Illinois FOID (Firearm Owner Identification) cards. His data shows an increase in the number of FOID cards from 1.3 million in 2010 to 1.9 million in 2015, an astonishing 46% increase over 5 years (p. 63). He also cites the Zogby Analytics survey (though without noting its sample of likely voters), as well as data on the declining levels of confidence in government (from the GSS) as a possible explanation for under-reporting. I will have something to say about the GSS confidence questions in relation to gun ownership soon (I hope!) based on my own research.

In the end, even though others have come to the same conclusion, I still think it is beneficial to read and think about the original texts and to come to one’s own conclusions. I know it was important for me, for example, to read Kellerman’s original work on guns in the home as a risk factor for homicide. And it is central to my teaching strategy in the Sociology of Guns for students to read original research on the issues we discuss, as opposed to someone else’s (possibly mistaken) take on it.