Although I have already written more about gun ownership statistics than I care to (here and here and here and here), the questions of who owns how many guns and how we know are important. So I took note when sociologist Dan Hirschman posted today on the scatterplot blog that the data for the 2016 edition of the biennial General Social Survey is now publicly available. Hirschman also linked to the GSS Data Explorer trends page which allows users to quickly look at basic trends on issues of interest.

If you go to the page, you can find the question “Does respondent have gun in home” under the broader “Civil Liberties” category (it’s in the Bill of Rights after all!), and within that under the “Crime” category (oh, well, can’t win ’em all!)

Using your mouse as a magic wand, you can quickly generate the trend line for the household gun ownership (HGO) question: “Do you happen to have in your home (IF HOUSE: or garage) any guns or revolvers?”

As in 2014, the GSS finds 32% of American households have guns, roughly the same rate as the GSS has found through the 2000s. The GSS Data Explorer also makes it easy to look at rates of HGO for subpopulations, like men and women, and by political party.

Note the 32% aggregate HGO combines 36% of males who say they have a gun in the home and 30% of females, who are known to underreport household gun ownership. Even if no men underreported HGO (which they certain do), the actual HGO is almost certainly higher than 32%. 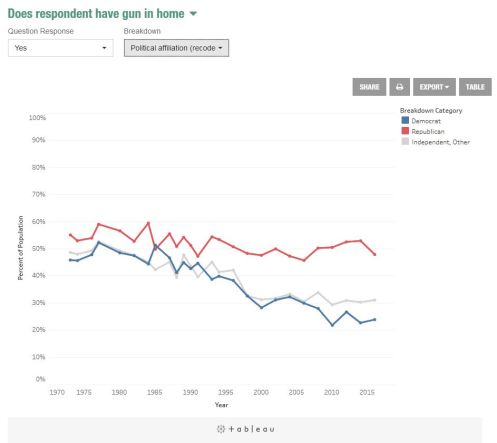 With respect to political affiliation, the 32% aggregate combines the 24% of Democrats, 31% of Independents, and 48% of Republicans who claim guns in their homes. Regardless of the specific percentages, the relative ranking of these three groups makes sense. Of note is the 5% drop in Republican HGO from 2014 (53%) to 2016 (48%). Could this be a “Oh Crap Hilary Clinton is Going to Be the President” false negative effect?

As I have discussed before, false negatives are certainly a problem in surveys of gun ownership. Basically, people not admitting to having guns in their households when they do. There is no way of saying with certainty how many false negatives there are, and these would also have to be weighed against the possibility of false positives. (Though I believe there is more incentive to falsely say “No” than “Yes.”)

If we add the refusals to the GSS HGO estimate, and also take into consideration the margin of error due to sampling variation (which has ranged from +/- 2.2 to +/- 3.1 for the 95% confidence interval over the years of the GSS), we get a chart that looks like the one Sandra Stroud Yamane generated in Excel.

In my view, it is likely that:

(A) At a minimum, the rate of household gun ownership has been very stable for the past 20 years, but at a higher level than the GSS estimates suggest, and

(B) If false negatives are growing post-Clinton/1994, then the rate of household gun ownership in America is not only stable and higher than the GSS estimate, but also growing.