In a much longer recent entry I questioned the common narrative that the National Rifle Association was (largely? mostly? considerably?) a-political prior to the 1977 Revolt at Cincinnati.

Continuing my stroll through 100 years of the NRA’s flagship publication, The American Rifleman, I came across still more evidence that the fundamental political emphasis of the NRA has been to protect the Constitutional rights of law-abiding gun owners (that pesky Second Amendment). Case in point: the 2 February 1918 issue (back when the magazine was still called Arms and the Man).

Hopefully the page images below are clear enough that you can read the full text of “Fight the Firearm Law” for yourself. Here I will just highlight a couple of relevant passages. The piece begins by reporting on work of the United States Revolver Association’s legislative committee which “serves to emphasize the need of eternal vigilance on the part of all revolver and pistol shooters of the country in preventing the enactment of insane laws of the Sullivan type.” That heated rhetoric!

The column then highlights the nascent attempt to organize grassroots political action in the form of USRA members watching their state legislatures and reporting back to the legislative committee as necessary. Then, as now, much of the action in terms of firearms legislation happens on the state (and local) level, rather than the federal level.

The column then turns to its objection to anti-firearm legislation being advanced around the country:

“The trouble with most of the bills which seek to prohibit the possession and use of firearms is that they make no distinction between the law-abiding householder whose constitutional right it is ‘to keep and bear arms,’ or the sportsman who finds clear recreation in pistol or revolver matches, and the thug who arms himself for lawless purposes.”

Oooops, to those (noted in my previous column) who say that the NRA was just a marksmanship organization and did not care about the Second Amendment until recently. I have not done a thorough political history of the organization, but I would imagine the NRA got more political every time the right to keep and bear arms was threatened.

“Neither the USRA nor the shooters of the country desire in any way to interfere with the enactment of a law when that law will operate to restrict the possession of firearms by the lawless element, and to prevent their use for criminal ends. Unfortunately, however, the average law offered for this purpose makes no distinction in its application.”

We a couple of stylistic tweaks, this sentiment is routinely expressed today by the NRA. Perhaps the only thing that has changed is the number of such laws proposed and the hopefulness of the NRA that they will, in fact, prevent criminal use of firearms. 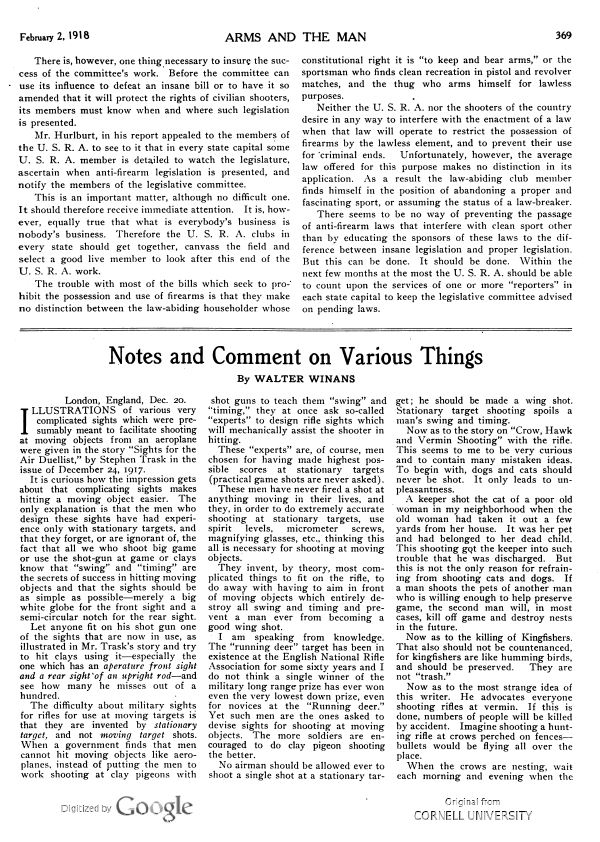 Which is not to say that NOTHING change. Check out “The Civilian Club and the Public School,” which encourages shooting clubs to “foster enthusiasm for rifle shooting in the public schools of the country.” The article notes that a “very large percentage of educational institutions in the United States already include rifle practice in their curriculums.”

That most certainly HAS changed.