Paper Available on “The Rise of Self-Defense in Gun Advertising: The American Rifleman, 1918-2017”

Later this week I will be attending a Gun Studies Symposium at the University of Arizona in Tucson, organized by Jennifer Carlson, Kristen Goss, and Harel Shapira. The symposium includes a Who’s Who of scholars who have studied guns for decades, including Philip Cook (Duke), David Kopel (Denver Law), Robert Spitzer (CUNY), Frank Zimring (Berkeley), and Gary Kleck (Florida State). And then there’s me, who has been examining gun culture for a mere 5 years.

During that time, I have been trying to describe and understand the new incarnation of America’s historic gun culture that seems so evident today. A culture centered on armed self-defense and concealed carry.

From time to time I get some push back, either saying that self-defense has always been a part of American gun culture or that there is no singular gun culture today but only plural gun cultures centered on the various things people do with their guns: self-defense, hunting, collecting, and many different kinds of sport or recreational shooting including plinking, target shooting with pistols, long range precision rifle, skeet, trap, sporting clays, muzzleloaders, Cowboy Action Shooting, 3 Gun, IDPA, USPSA, IPSC, and on and on.

This work addresses these issues by examining the themes present in advertisements in The American Rifleman over a period of 100 years, from 1918 to 2017. Although this is only one small measure of everything that gun culture is, using a consistent source of data over time allows us to see the historical trend more clearly.

This major conclusion is reflected in the figure that appears above. If you would like to read the entire argument, I have made a draft of the paper freely available on the SocArXiv website. As this is a work in progress, I welcome your feedback on it. 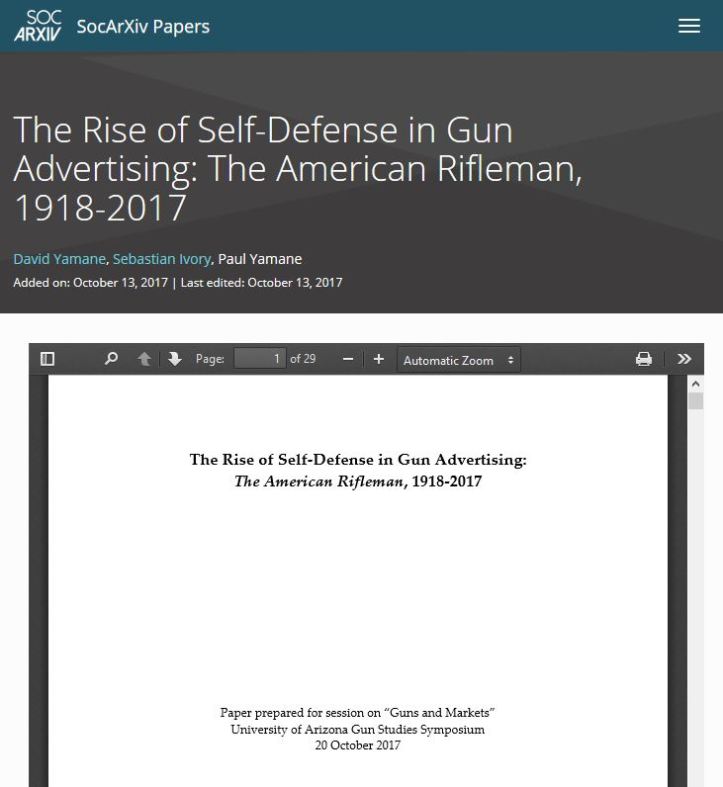