As a fan of Wilderness Tactical Products, I jumped at the opportunity to spend some time I found in Phoenix checking out the company’s operation. I was impressed at what I saw. 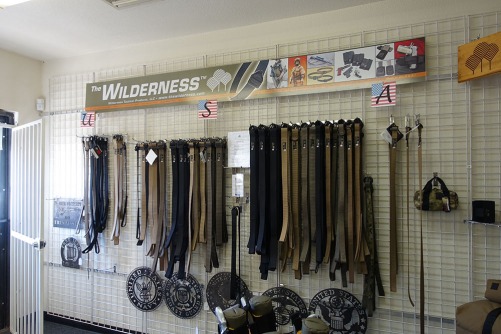 I have been focusing a lot late on the “software” (training and skills) of gun culture lately, rather than the “hardware.” But in a forthcoming book chapter, “‘The First Rule of Gunfighting is Have a Gun’: Technologies of Concealed Carry in Gun Culture 2.0” (pre-print available online), I talk about the problem-solving nature of technological developments in gun culture.

Both of Wilderness Tactical’s flagship products — the Original Instructor Belt and the Safepacker — were designed by company founder, Ralph Holzhaus, to solve problems he experienced as a law enforcement mountain rescue officer and instructor.

Samantha DeZonia is Holzhaus’s daughter and serves as the General Manager of Wilderness Tactical Products LLC. Although she originally intended to attend law school after graduating from Arizona State University, DeZonia got some first hand experiences working with lawyers and thought otherwise. She now serves as the public face of the company at trade shows like the USCCA Concealed Carry Expo (where I first met her) and the NRA’s Carry Guard Expo. She also acts as a handler of sorts for her father, trying to censor his colorful descriptions or making sure they are understood as “off the record.”

I was originally supposed to visit Wilderness Tactical on a Thursday, but DeZonia told me her father wouldn’t be there that morning and strongly suggested I come on Wednesday so I could meet him. She couldn’t have been more right.

Back in the 1970s, Ralph Holzhaus owned a retail store called Wilderness Adventure Headquarters in Phoenix. One time he sold a tent to a customer who couldn’t pay in cash, so instead traded him a sewing machine. Another member of the mountain rescue team knew how to sew, and so Ralph learned from him. This allowed him to make the design ideas in his mind come to life and also to ensure the products were up to his quality standard: OVERKILL. It never fails, as the company motto says.

Holzhaus still sews every day. Instead of a computer, his office desk has two sewing machines on which he turns out straps and slings and holsters. He shows me how every seam is multistitched and all the starts and stops are backstitched. He describes the stitching on the shirt I am wearing and the buttons on the (Wilderness Tactical) shirt he is wearing.

None of this comes cheap or easy. You’ll never see Wilderness Tactical Products in a big box store; they simply can’t hand make every product in house at that volume or at the big box price point.

For example, the shirt that Holzhaus is wearing is called the “Sonoran.” It is a Hawaiian style shirt that is cut slightly wider and longer to accommodate concealed carry. It costs $100 (well, $99.99). Why? Because it is sewn entirely in-house, by one person in fact. Production of the shirt was actually on hiatus for a year because the shirt-maker had to retire and they couldn’t find a replacement who could do the job well enough.

You can get a Propper Covert button up short sleeved shirt for $40, made in the Dominican Republic, Haiti, or Puerto Rico. The shirts I have with me this week are made in China (Howler Bros) and China (Simms Fishing Products) and Indonesia (5.11). And actually they were not much cheaper than the Wilderness Tactical Sonoran shirt. I will definitely be getting one once they are back in stock.

It takes about a dozen steps to make the Original Instructor Belt. If you are lucky enough to live in Phoenix, you can stop into the retail store (in the front of the building where they do the work) and if they don’t have your size/style of belt, they will make one for you while you wait.

Wilderness Tactical continues to evolve their product lines in keeping with emerging trends. Especially since the Las Vegas massacre, “IFAKs” (individual first aid kits) are all the rage. The Wilderness Ankle Cuff/Ankle IFAK fills that need, along with a trauma kit they sell manufactured by H&H Medical. 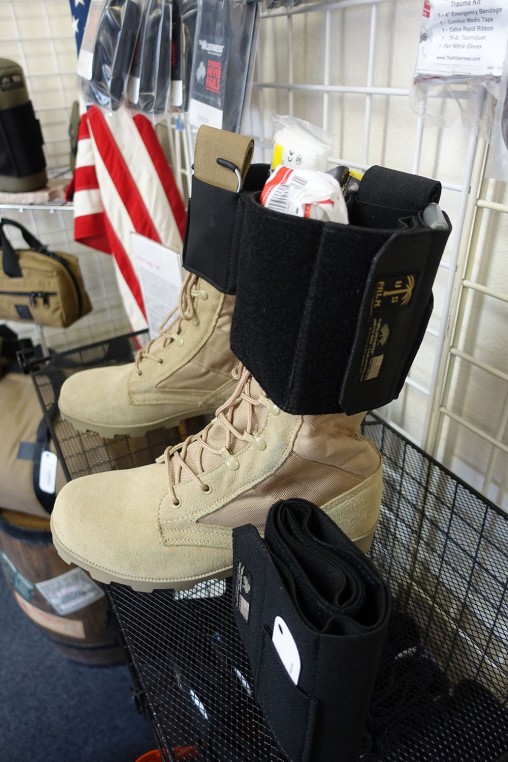 The hardware side of the gun industry is crowded and competitive, but there always seems to be a place for upstart companies that fill a niche or build a better mousetrap. Wilderness Tactical Products was such an upstart back in the early 1980s. And in important ways, it remains so.

Additional disclosure: I also personally spent over $200 on other Wilderness Tactical products beyond that.