I only know this because the book’s jacket description tells me so. I am not a gear guy in the least, not a rifle guy, and certainly not a military rifle guy. I am centrally concerned with civilian not military gun culture. So, why did I spent two full days last weekend reading this book? 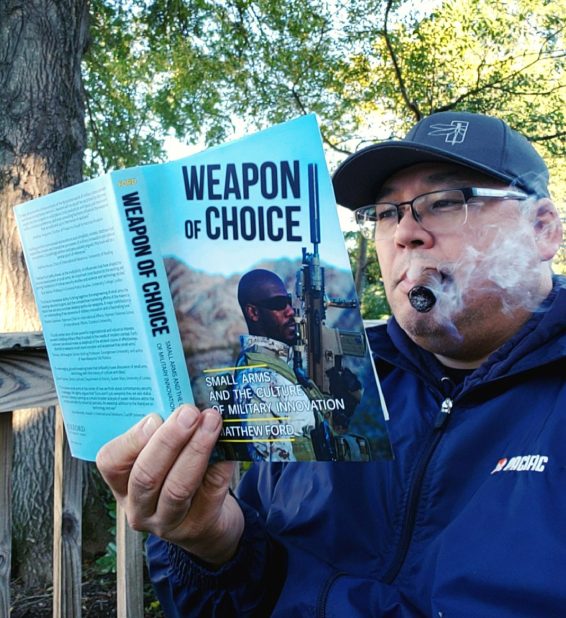 The book’s author is Matthew Ford, Senior Lecturer in International Relations at the University of Sussex. Ford earned his PhD from the Department of War Studies at King’s College London and later worked as a Strategic Analyst with the Policy and Capability Studies Department of the UK Ministry of Defence.

This isn’t a comprehensive review of Ford’s book, but suffice it to say that readers who are primarily interested in the development of the Belgian Fabrique Nationale (FN) Special Operations Forces Combat Assault Rifle (SCAR) itself will be disappointed (see YouTube review on Forgotten Weapons channel). Ford’s story in a way culminates with the SCAR (and tells us a lot about the cleverness of FN), but he covers a lot of ground before we get there.

Ford begins by observing the straightforward objective of gun design:

For centuries, engineers and gunsmiths have sought to find technically viable responses to difficult combat and battlefield problems. In its narrowest sense, this has resulted in engineers trying to find the technical means to get a projectile to hit a target at a certain range with a reasonable chance of achieving a desired effect. Looked at this way, gun design is simply a matter of defining target type, the range to target, the handling preferences of the weapon and then identifying the technological solution that addresses these consideration. In this context, the engineering is a question of tensile strengths, recoil energies and muzzle velocities. In the popular imagination, the result of these efforts ought to be the best possible weapon given the parameters that have been set. This mode of thinking fits with a form of analysis that looks at the evolution of small arms as a process of ironing out technical difficulties before reaching an ideal form of weapon. (p. 4)

As military weapon systems go, the rifle is relatively mature and simple. It has existed for hundreds of years and has “maybe only 120 different components to consider” (p. 24). But, Ford notes, “even the simplest of technologies is deeply contested” (p. 2). Even “one of the least expensive weapon systems in the military inventory is capable of stirring up some of the greatest controversies” (100).

These contests and controversies are his analytical focus as he surveys the adoption (or not) of various Anglo-American military long guns over the course of the 20th century. The book combines a chronological narrative of small arms development with chapters focused on the different organizational actors that competed with each other to influence the development and adoption of different technologies: infantry soldiers (ch 2), engineers (ch 3), scientists (ch 4), bureaucrats (ch 5), alliance partners (ch 6), and industrialists (ch 7).

In the end, “The process [of innovation] is not neutral, but reflects the power relations that exist between the social groups concerned” (p. 18). Which means the adoption of military small arms is not a “purely technical exercise” (p. 26).

A less well-known (to me) case is the failure of the British military to adopt the EM-2 rifle to replace its .303 caliber Lee-Enfield pattern rifles. Learning from the battlefield conditions of World War II and emphasizing movement and rate of fire, the EM-2 was a “bullpup” design chambered for a smaller, higher-velocity .280 round. But the British innovation ran up against powerful forces like the desire for ammunition standardization under NATO, a United States contingent that enforced a particular benchmark for lethality favoring a .30 caliber bullet at the Aberdeen Proving Ground trials, and Fabrique Nationale’s swerve from supporting the British development to taking business from the British with their own rifle. In the end, after all the work that went into developing the EM-2 rifle and .280 round, Churchill unilaterally decided to adopt the US T65 ammunition (subsequently renamed the 7.62mm x 51mm NATO Standard) and Belgian FN Fusil Automatique Legere (FAL) rifle (p. 100). As Ford observes with no little irony, “The next weapon to be adopted by the British Army was to be a semiautomatic, self-loading rifle of Belgian design using an American standard of cartridge, all of which bore no relation to the battlefield conditions that inspired its selection” (p. 115).

Following the irony of the British adoption of the FN FAL in 7.62 NATO Standard, Ford continues, in 1957 “the US Army reneged on its agreement with the UK to adopt the FAL and instead chose the M-14 automatic rifle designed by the US Ordinance Corps.” As is fairly well-known, the US subsequently changed its mind again in 1964 and adopted the small-caliber, high velocity (SCHV) 5.56mm round and the M-16 rifle for out of NATO area operations, including Vietnam (p. 117).Having discussed the role played by military elites, engineers, scientists, bureaucrats, and alliance partners in the development and adoption of small arms technologies, Ford concludes by highlighting the relationship between infantry soldiers and industrialists. In his view, that relationship is best understood by the idea of “Gucci kit.”

“Gucci Kit = non-issue kit. Most of what a soldier carries with him in the field falls under the definition of Gucci. Issue kit is mostly bollocks, Gucci (sic) kit is normally the dog’s bollocks” (p. 141).

The soldier’s point of view on what works and what doesn’t is sometimes privileged because they are “flesh witnesses” in battle. The professional soldier wants the tools to do the job properly, to be sure. But Ford maintains that, “more than this, the goal is to do it with some ‘style’” (p. 142).

These twin desires of soldiers to be professionals and stylish gives industry an opportunity to manage infantrymen’s sense of what they “need.” Manufacturers market products to soldiers that not only “do the job” but also “look the part.” This management (or, even, manipulation) can be seen “in the way that soldiers increasingly look to modify their kit and weapons in order to make it peculiar to themselves” (p. 143).

Here, catering to “Special Forces” as a way of influencing regular infantry has been an effective strategy for the military arms industry. “To be elite,” Ford argues, “meant to live by different rules and to have better kit” (p. 166). Therefore, companies like FN and Heckler & Koch are able “to sell tricked out equipment to willing purchasers” (p. 169). Manufacturers now make appeals to Special Forces, giving them products and entertaining them much like Glock officials did with police officers when they took over the American LEO market.

Drawing on an account of the mission that killed Osama Bin Laden by “Mark Owen,” Ford notes how members of US Navy SEAL Team Six “were given free range to acquire the weapons that suited them personally” (p. 169). Ford worries, however, that this approach may just “feed the urge to gold-plate existing weapon systems rather than develop entirely new platforms” (p. 169).

Which brings us back to the image on the cover of the book: a US Navy Seal carrying a tricked out FN SCAR, the rifle that US Special Forces chose in 2009 to replace the M-4 Carbine, which remains the primary infantry weapon in the US Army and Marine Corps. For now.