What a Study of Military Small Arms Innovation Has to Teach Us About Civilian Defensive Firearms: Balancing Competing Features, Ballistic Science and Lethality (1 of 3)

Yesterday I posted about Matthew Ford’s book, Weapon of Choice: Small Arms and the Culture of Military Innovation (Oxford University Press, 2017). I noted that I am not a gear guy, a rifle guy, a military guy, and certainly not a military rifle guy.

My interest in reading the book is what it may teach us about civilian defensive firearms. This begins a series of companion posts that offer my thoughts on the similarities. 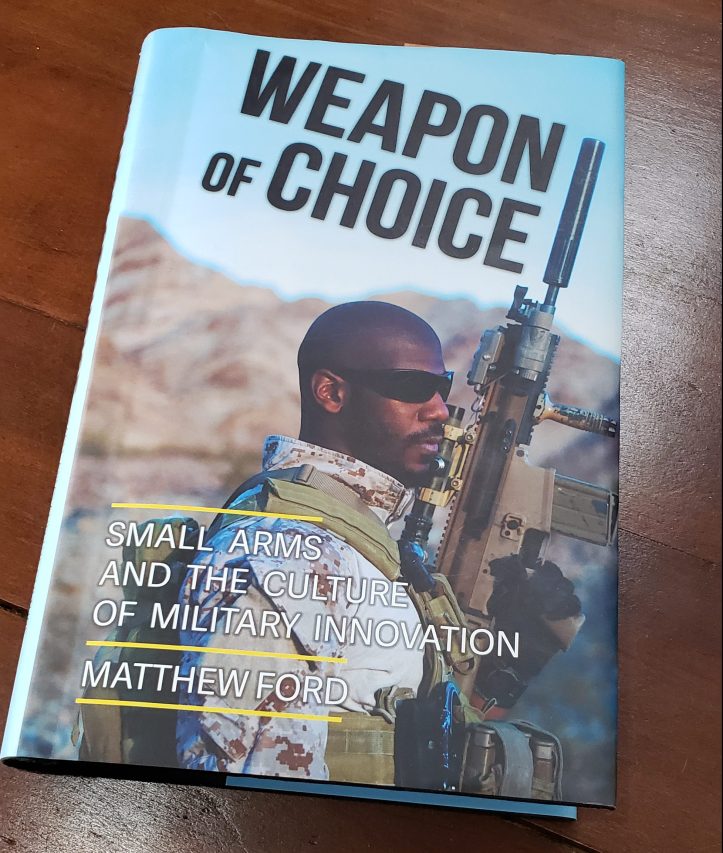 According to Ford, military weapon engineers try to “draw connections between the characteristics of a firearm and soldier performance so that choices can be made to balance competing features such as weapon reliability, weight, ergonomics, ammunition-consumption and training.” This is not a “purely technical exercise” (p. 26).

We find similar tradeoffs in the selection of guns for concealed carry. As I argued in a paper I presented at Amherst college in March 2017 (now published in a recently released book on The Lives of Guns), a larger gun can be more lethal because it holds more rounds of ammunition in a larger caliber, has a longer barrel and sight radius (for accuracy), and is heavier to absorb recoil (to get back on target more quickly). But such a gun can be harder to carry concealed than a smaller gun.

Clint Smith, founder and director of the gun training center Thunder Ranch, famously declared that “carrying a gun is not supposed to be comfortable; it’s supposed to be comforting.” But countless Americans who are permitted to carry a handgun in public do not do so because they cannot comfortably fit the gun into their everyday lives. How to reconcile the competing demands of carry a sufficiently lethal weapon in public concealed, safely, and comfortably is not a purely technical exercise either.

One might think that the “science of ballistics” would help resolve some of the conflicts between competing features of military weapons (and, by extension, concealed carry weapons). Such thinking would be wrong. In 1942, Solly Zuckerman “would revolutionize the science of killing and in his own words create ‘the new subject of wound ballistics’” (p. 75). But by 1946, Zuckerman was forced to concede that “it may not be a ‘purely mathematical problem.’” (p. 87).

Lethality is not an absolute, mathematical calculation but a probabilistic one. Years after Zuckerman, Swiss ballistician Dr. Beat Kneubuehl distinguished between a weapon’s effects and effectiveness. The effect of a shot is unique: “For instance, an airgun pellet with a muzzle velocity of 7 joules that penetrates the spine and damages the spinal cord has a much greater effect than a 44 Rem Mag. Hollow-top with an energy of 1500 joules that grazes the upper arm. This means that statements like ‘A hollow-point bullet has a greater effect than a full metal jacket bullet’ are meaningless” (p. 95). Rather, “The effect of a bullet depends on a wide variety of factors that extend well beyond its physical or design characteristics. In the first place, to be highly effective a bullet needs to strike a certain part of the body.” This depends on, among other things, “the skill at arms of the shooter.” Thus, “The effect of a bullet can only be established . . . after each round has been fired” (p. 95). In the end, the effectiveness of a caliber is not independent of its use.

This suggests putting an end to the incessant debates about “stopping power,” 9 vs. .45, “subcaliber” or mouse guns, etc. But it won’t.

Nonetheless, we should pay more attention to complex rather than simple calculations of lethality based on ballistics.