“Live” Tweeting the Gangster Capitalism Podcast on the NRA

Following is a long Twitter thread I wrote while listening/reacting to a podcast series called Gangster Capitalism which focused this season on the current crisis of the National Rifle Association (NRA).

I went into it skeptically, since the NRA is often misunderstood and hatred toward it takes general biases toward guns in the media and turns them up to 11. But in the end I found the series largely accurate (to the extent that I know what is going on in the NRA) and only disappointing in a couple of places, notably in its final conclusion.

A thread by David Yamane

OH SNAP! “Against the Rules Presents: Gangster Capitalism. In this season…the NRA is in the crosshairs…We’re pulling back the curtain to reveal that this has little to do with guns. It’s about money.” (podcasts.apple.com/us/podcast/aga…)

Add [Michael] Lewis’s storytelling prowess to internal and external critiques and organizational foibles and this promises to be HOT. Plus the Obamas bought the rights to Lewis’s “Fifth Risk” for Netflix so it is most def about money.

CORRECTION: This is Michael Lewis PRESENTS “Gangster Capitalism” not Lewis himself. Which is good because I assume Lewis is smart enough not to say the NRA is “the nation’s most powerful special interest group” as the host of Gangster Capitalism does.

Turns out the host is documentarian @AndrewJenks who apparently hasn’t heard of the nation’s truly most powerful special interests – Big Pharma, insurance & telecom, oil and gas. Which is odd because he cashes checks from HBO, owned by AT&T, as John Oliver routinely notes. 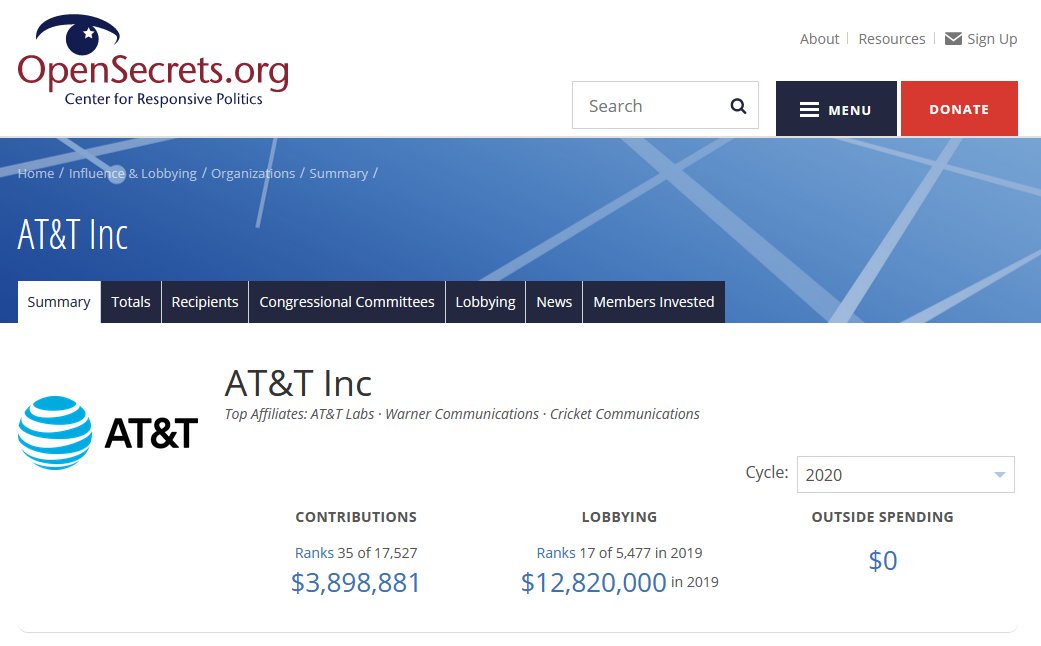 I am very interested in investigative journalism on what’s going on in the NRA, but if your journalism is solid you don’t need to say stupid, incorrect, hyperbolic things just to get attention. It closes people’s ears and you end up just podcasting in an echo chamber.

I detect no lies in Episode 1, though the reporter does whatever the opposite of “burying the lede” is by leading with the “most powerful special interest org” line. Honestly, if you hate the NRA, you don’t want to give life to this myth which the NRA uses to its advantage.

There’s no question that NY AG James has it in for the NRA (which she calls a “terrorist organization”). But knowing you have sworn enemies means you should keep your house in order all the more. Hubris leading to a fall from grace, an old story. Showtime “Billions” Season 6?

Episode 2 of Gangster Capitalism on the NRA (“A Clear Crisis”): No lies detected. High drama at the NRA Annual Meeting of Members in Indy 2019. Includes perspectives of insurgent @PincusRob and reporter @StephenGutowski.

I was there for the failed “Revolt at Indy” and the podcast captures the high drama of the moment.

Ep 3 of @GangsterCapital , “Man on the White Horse” – Intrigue grows – the joint rise of and incestuous relationship between Wayne LaPierre and Ackerman McQueen. Builds on and adds to @mikespiesnyc reporting in @NewYorker. (newyorker.com/news/news-desk…)

I also discovered a cache of supplementary documents available on the podcast’s website: (shows.cadence13.com/podcast/gangst…)

The @washingtonpost already reported on the Blue Sky Productions M-1 deal in 2013. And this relates to my only qualm with this episode: Making it seem like this deal opened the floodgates for “military style” rifles in the US. (wapo.st/17CiwRQ?tid=ss…)

WaPo quotes gun control activist Josh Sugarmann of VPC saying they were “basically the first of the military weapons marketed to the civilian population. If you were going to draw an ‘assault weapons timeline,’ it would start with the M-1 and eventually end up where we are today”

And @GangsterCapital uses Sugarmann to make the same point. But civilian interest in military surplus firearms predates the M-1, the line between military and civilian arms is blurry (see hunting rifles), and military pedigree has been used to sell guns to civilians forever.

Sugarmann and the VPC have also been criticizing the “militarization” of gun culture forever, simplistically in my view. (guncurious.wordpress.com/2020/02/28/is-…)

Ep. 4 of @GangsterCapital – “The Big Game” – continues to highlight the excessive entanglement of Wayne LaPierre and Tony Makris (Mercury Group a.k.a. Ackerman McQueen) to the tune of $18M from NRA to Makris’s TV show “Under Wild Skies” with no signed agreement.

One of Makris’s underlings at Mercury, Tyler Schropp brought in to head NRA Advancement, as previously reported by @mikespiesnyc in the New Yorker. The money just flows back and forth between LaPierre and his cronies so freely its hard to keep up with. (newyorker.com/news/news-desk…)

Maybe give Spies a co-author credit on this episode bc a year ago he also interviewed Aaron Davis, former NRA fundraiser, who plays a big role in Ep 4 of Gangster Capitalism. (wnycstudios.org/podcasts/tnyra…)

Much is made about the NRA Advancement division cultivating big money donors, but at my private, non-profit organization (Wake Forest U) we also have an “Advancement” office that cultivates big money donors. That’s how the world works. The NRA’s problem is the financial incest.

Ep 5 of @GangsterCapital – “A Hostile Takeover” – Here the money trail leads us to more bad decisions. NRA attempts to put forward a new public face in the form of NRATV for which it paid guess who? AckMac $20M/yr for a mere tens of thousands of views monthly.

NRA brings in a failed businessman named Josh Powell as chief of staff to lead the charge for a new training and insurance program called “Carry Guard.” Powell, who considers Tony Makris (of AckMac) “to be like a brother” earns nearly $1M in 2018.

The Carry Guard training program was developed without input from the NRA’s existing education and training division, as we learn from former employee Andy Lander. Because its primary purpose was to drive the Carry Guard insurance which was supposed to bring in big money. But the CG insurance program turned out to be, as a friend put it, the NRA “exposing its soft underbelly to an enemy.”

Not only NY AG James but Gov Cuomo had it in for the NRA. As he Tweeted, “If I could have put the NRA out of business, I would have done it 20 years ago.” 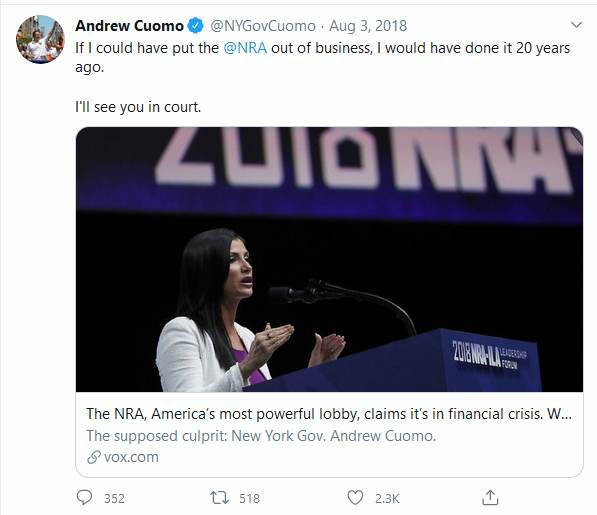 In this episode Cuomo says of Carry Guard insurance, “they call it ‘murder insurance.'” Who is “they”? The hard line gun control advocacy group Guns Down America, as I wrote about back in 2017. (gunculture2point0.wordpress.com/2017/06/09/app…)

At this point, for the first time in the series, I got annoyed when advocacy journalist @mikespiesnyc is talking about self-defense insurance and can hardly speak through his snickering. Which might be defensible if what he said was coherent. QUOTE:

“You’ve got to understand why [self-defense insurance] doesn’t really make any sense. Even if it is legitimate self-defense it does sort of open the door to [snickers] a whole host of other issues that are not [snickers] not self-defense.”

Huh? Not New Yorker level ideas here. In any event, to borrow from my friend again, if you hang your nuts over a meat grinder and then your nuts get ground up, do you blame the meat grinder? NO. If you have sworn enemies, do not bare your throat to them. (Aside: I will cover self-defense insurance in my book.)

Of Josh Powell, gun trainer and advocate @PincusRob observes: he comes from out of nowhere, “looking like he was potentially being groomed to take the spot of Wayne LaPierre . . . and yet it turns out that he really just kind of a scumbag.”

NRA Board Member (& publisher of Soldier of Fortune magazine) Robert Brown calls Powell a “worthless scoundrel,” wants WLP to fire him. WLP instead promotes Powell to work with NRA attorney William Brewer (who is married to sister of AckMac CEO – are you keeping this straight?).

Bill Brewer enters the picture as atty for NRA billing tens of millions annually to go after AckMac. Also adding a complex family dynamic. Brewer is married to Skye McQueen, daughter of Angus (former CEO) and brother of Revan (current CEO). @GangsterCapital diagrams it for us. 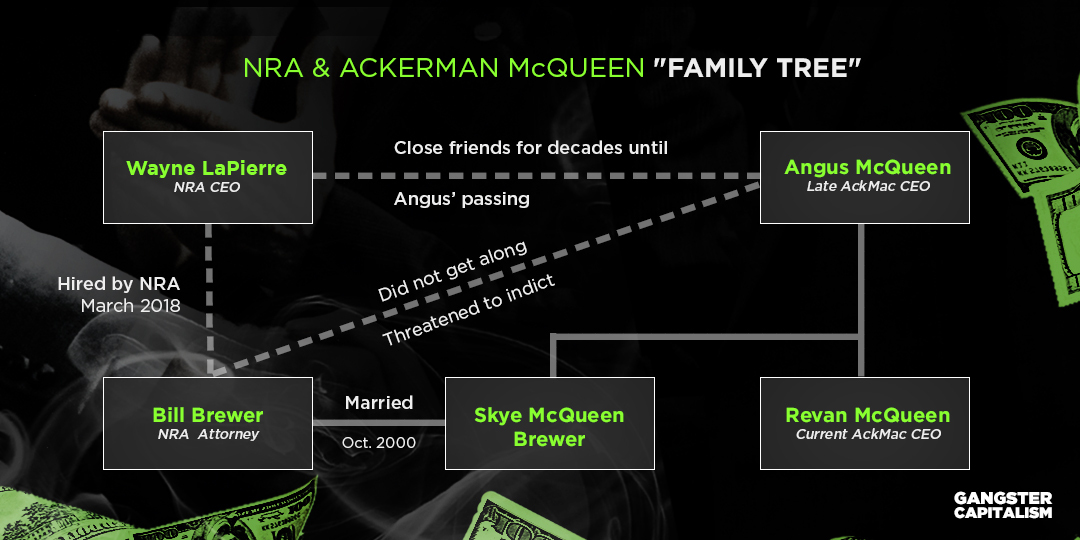 Ep 7 of @GangsterCapital – “Enough is Enough” – We meet Marion Hammer (Florida lobbyist, past NRA President, and long time Board Member), interesting in herself but also a point of entry into Qs abt the NRA BoD more generally, esp Q of “independent” board members.

As noted in the episode, Hammer was a vocal supporter of the NRA leadership, esp. Wayne LaPierre, at the 2019 NRA members meeting in Indy. Video here shows her and reformer @PincusRob going head to head. (youtu.be/sHmQzGp2BZU)

According to a disclosure distributed at that meeting, Hammer received $270K from the NRA for consulting and lobbying work. But she was only one of board members who received payments from the NRA in 2018. 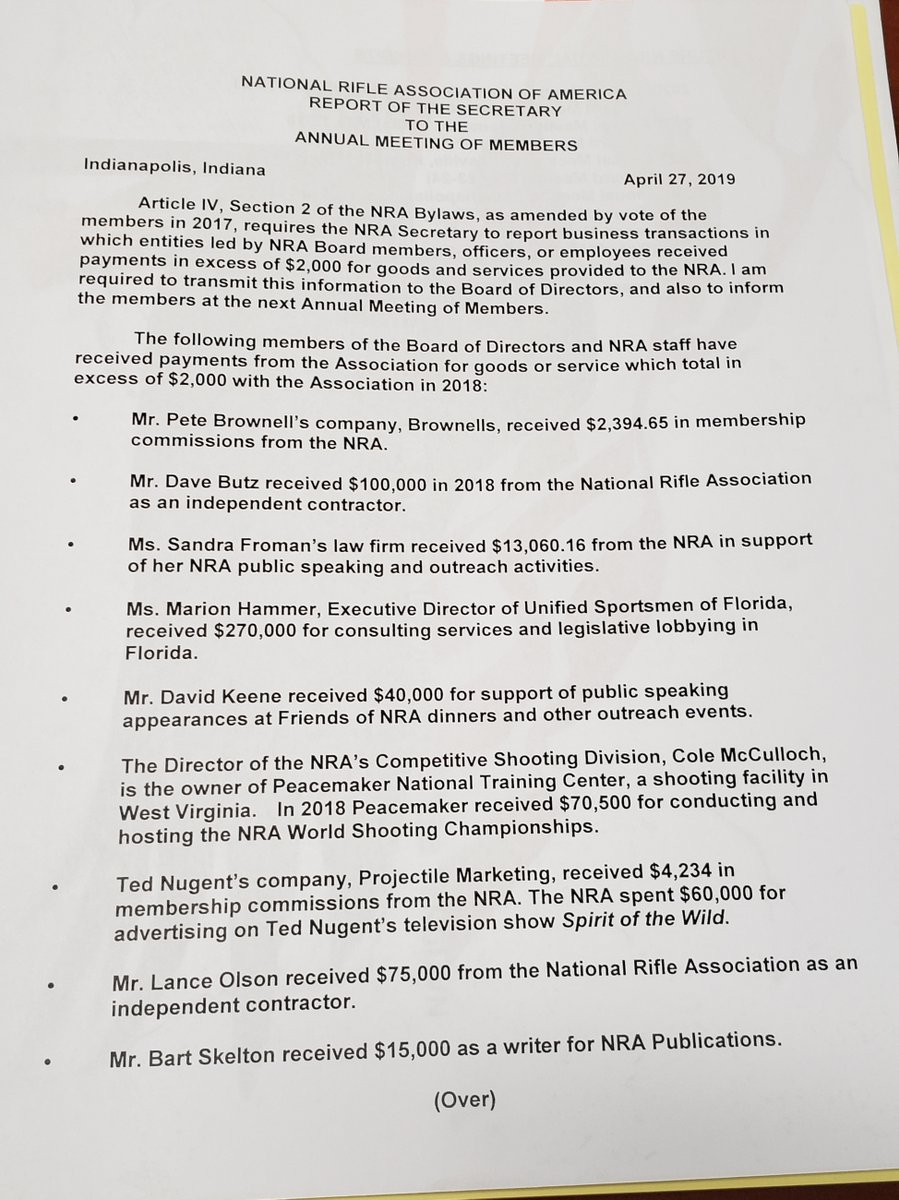 I am not a scholar of non-profit organizations, but the expert cited suggests that it is more common for non-profit board members to give money to their organizations than to take it. (shows.cadence13.com/static/img/gan…)

An odd aspect of this podcast series is the host @AndrewJenks referring to Wayne LaPierre as “Wayne” rather than “LaPierre.” Is that a new documentarian thing?

Hater of the Florida Scrub-Jay Marion Hammer defends WLP to the end, but a person can respect some of what WLP did for the NRA without succumbing to blind obedience, right? Someone with less hubris might take his millions of NRA dollars and ride off into the sunset.

While I anxiously await the next ep of @GangsterCapital I am looking at a Pew Research Center survey from 2017 that shows 55% of respondents said the #NRA had TOO LITTLE or the right amount of influence. I wonder how that might have changed since then?

Ep 8 of @GangsterCapital – “Down to the Studs” has dropped. The title refers to a phrase used by WLP to describe cuts at NRA in the wake of loss of income and mounting legal bills. Audio leaked from Jan 20 BoD meeting reported by @timkmak (npr.org/2020/04/21/839…)

Publicly WLP is blaming the coronavirus for the NRA’s financial trouble – which no doubt hurts – but the roots of this problem are deeper than COVID. Terrible financial management and leadership.

This podcast & the journalists it relies on do so much to bring these issues to light, it’s too bad they exaggerate & call the NRA “the most powerful political organization in America.” @timkmak we know you are selling a book on the NRA, but what is your evidence for this?

The “monster that was created” in WLP was created by AckMac to preserve their NRA cash cow says @PincusRob. Under AckMac/WLP, NRA messaging narrowed to one demographic (conservative, white, Christian gun owners) & broadened to include conservative culture war issues esp. on NRATV 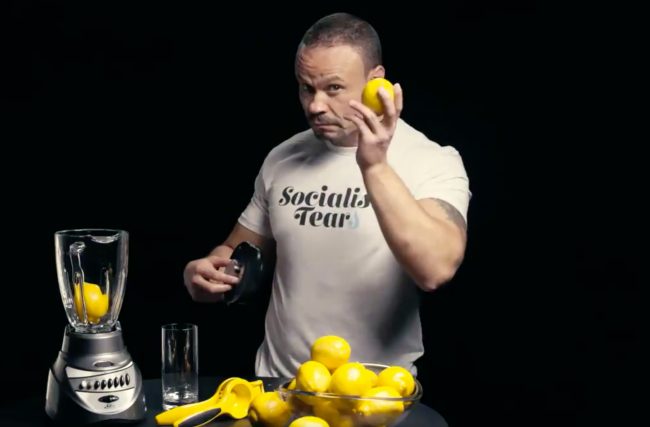 Like many gun owners, Pincus holds out hope that the NRA can reform & be a better org for diverse gun owners. I saw the same w/pro-change Catholics while studying the Catholic Church and faculty who wish their universities were purer in various ways.

In the end, @GangsterCapital lays blame for the NRA’s woes on GREED. You basically have a for-profit company (AckMac) running a non-profit (NRA) and the leaders of both being enriched at the expense of the members.

Wish they would have ended right there but if you thought there’s no way @AndrewJenks could do a whole podcast about the NRA & not question their gun advocacy, you would be right. Although he told interviewees “this season would not be about the gun debate,” in the end it was.