BOTTOM LINE: Debates over guns are a double-whammy for the empirically-minded social scientist. On the one hand, both pro- and anti-gun sides of the debate speak as though the data unequivocally support their position. On the other hand, both sides acknowledge that, in the end, the data are irrelevant to their positions. Hence, evidence-based adjudication of different policy recommendations becomes, if not impossible, then at least highly improbable.

On Wednesday, January 16, 2013 President Barack Obama held a signing ceremony for 23 executive orders seeking to curb gun violence, including several addressing the background check system, gun safety mechanisms, and mental health issues. He signed the executive orders in front of four children who had written letters to the White House about gun violence.

2,500 miles – but more importantly, a cultural world – away, a record 62,371 individuals along with 2,000 media representatives and 1,600 exhibitors took over 630,000 square feet of space in  Las Vegas for the 35th annual Shooting Hunting Outdoor Trade (SHOT) Show, the US gun and ammo industry’s annual trade show.

Focusing for the moment on the distinction between the pro-gun cultures and the anti-gun culture, I have quickly realized that there is a segment in each – how large, I do not know – that do not care about empirical data about guns and gun violence. They will make reference to data where it fits their agenda, but in the end, even if the data did not support their agenda, they would not abandon it.

As an empirical social scientist, it is amazing for me to wade into a field of research in which, for example, estimates of how many times firearms are used in self-defense (called DGUs for defensive gun uses) annually range from 55 thousand (Hemenway 1997) to 2.55 million (Kleck and Gertz 1995). The anti-gun culture seeks to reduce gun violence in America by “informing policy with evidence and analysis” (Webster and Bernick 2013), while the pro-gun culture claims “facts don’t matter to the gun ban crowd” (Gottlieb and Workman 2011).

I have elsewhere commented on my initial forays into research on guns and crime (here and here), as well as guns as a risk factor for homicide (here and here). Among the interesting take-aways for me from these forays is the often (too) strong movement from complex and equivocal empirical findings to definitive and unequivocal policy statements. I am currently reading Reducing Gun Violence in America, a book hastily produced from papers presented at a symposium held at the Johns Hopkins University Bloomberg School of Public Health just a month after the Sandy Hook massacre. The authors self-consciously attempt to connect the state of the art in research with specific policy proposals designed to reduce gun violence.

This is an admirable goal, but easier said than done. For example, one of the primary policy recommendations that comes out of the volume is to establish a universal background check system for all persons purchasing a firearm from any seller. Basically this would require sales of firearms that take place between two private individuals to go through a background check in the same way as purchases from federal firearms licensees (FFLs). As Cook and Ludwig note in the volume, such a system is already in place in California. If a private citizen wants to buy a firearm from another private citizen, the transaction must go through an FFL who conducts the background check for a fee. So far, so good. Except, as Cook and Ludwig also note, “Whether the California system is successful in reducing gun violence has not been established” (p. 29). The volume is also peppered with speculative language which can easily be glossed as established fact, such as: “Some portion of these gun crimes might have been prevented if these offenders had been prohibited from possessing firearms when they committed the offenses for which they were incarcerated” (p. 67, emphasis added). 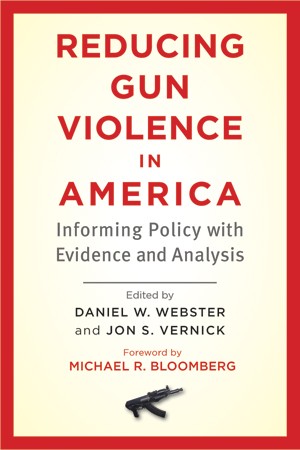 At President Obama’s January 16th signing ceremony, he declared, “I intend to use whatever weight this office holds to make them a reality. Because while there is no law or set of laws that can prevent every senseless act of violence completely, if there is even one thing we can do to reduce this violence – if even one life can be saved – we have an obligation to try.” If even one life can be saved is an interesting criterion for the implementation of public policy, but one that fits with the overall ethic of the Reducing Gun Violence volume. Even if the empirical data are equivocal, we should still do something in an effort to prevent gun violence – to save even one life.

Which brings me back to what I thought was going to be the main point of this post: the impossibility of evidence based adjudication with respect to the role of guns in American society. Here I draw on the work of Dan Kahan of the Yale Law School and the “cultural cognition” perspective he develops. According to this perspective, cultural values are prior to facts, not just in a moral sense, but in a cognitive sense. Following the cultural theory of risk pioneered by Mary Douglas and Aaron Wildavsky, Kahan categorizes people according to four worldviews: individualist, egalitarian, hierarchist, and communitarian. These worldviews shape our sense of what risks are real and what their potential consequences are. Individualists and hierarchists rate the risk of guns to be low and so favor gun rights, while egalitarians and communitarians rate the risk of guns to be high and so favor gun control. These assessments are prior to facts, and trump them.

Kahan makes two observations about data on the positive versus negative effects of guns. First, as the National Academy of Sciences has noted, the data are inconclusive. Second, they are not what truly motivate people’s positions on the issue. Therefore, that in terms of the role of guns in American society, including the defense of gun rights vs. the control of gun dangers, statistics are beside the point.