Although it was published earlier this year, I recently came across an interesting post on Dr. Sherman House’s “Revolver Science” blog called Becoming the Civilian Defender.

“Civilian defender” is House’s term for the regular people who take responsibility for their self-defense along the lines of tactical trainer Patrick McNamara’s “Sentinel” or sociologist Jennifer Carlson’s “citizen-protector.” His blog post outlines a curriculum of sorts that will help “regular folks” become better civilian defenders. The post is quite extensive and specific, so I will just touch on the main points here.

First, House describes his vision of the civilian defender this way:

I’m NOT advocating that THE CIVILIAN DEFENDER learn any of these skills to replace the kind of help that our standing army, fire departments, police departments or emergency medical staff provide to our society…quite the contrary.  I’m advocating that THE CIVILIAN DEFENDER educates themselves to the end of being able to survive situations they may encounter, when the aforementioned public servants won’t or cannot be there to swoop down and save them from whatever perils they encounter. THE CIVILIAN DEFENDER’S job is to…PROTECT!  Protect themselves from bodily harm, protect their family from bodily harm, and protect their livelihood and quality of life, from the forces of evil, gravity, accidents, or whatever pitfalls that life throws in the way.

These priorities can be found, for example, in Ayoob’s 2011 book Combat Shooting. 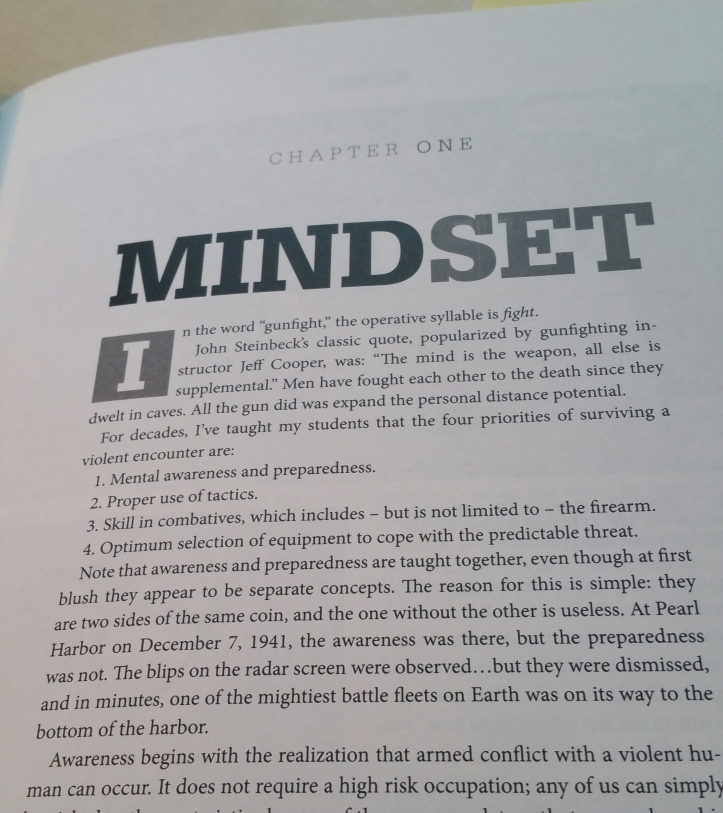 Significantly, Combat Shooting begins not with a chapter on how to shoot or what gun to use but with a chapter on “Mindset.” And the opening chapter begins with the observation of John Steinbeck in his posthumously published book, The Acts of King Arthur and His Noble Knights (1976): “The final weapon is the brain, all else is supplementary.” This sentiment was popularized in the gun culture by Jeff Cooper who said, “Your mindset is your primary weapon.”

House’s specific curriculum reflects this emphasis. Without revealing the details — you should read the original post — House’s “undergraduate education” for the civilian defender proceeds as follows:

My own education thus far has focused on 1, 4, 6, and 7, so I have a ways to go in this curriculum. For now, I agree with House (via Ayoob via Cooper) that my mindset has made me safer — or better able to navigate worldly dangers — than any firearm alone could.