Revolvers Kill! (May Be Even More Lethal Than Semi-Automatic Handguns)

I have been meaning to write for some time about an article we read last spring in my Sociology of Guns Seminar: “Impact of handgun types on gun assault outcomes: A comparison of gun assaults involving semiautomatic pistols and revolvers,” published in Injury Prevention in 2003 by D.C. Reedy and C.S. Koper. (Koper is possibly best-known for his work assessing the effect of the federal assault weapons ban for the National Institute of Justice.)

Like many observers of gun culture, I mostly see revolvers recommended (a) for ladies, (b) as a backup to your primary, semiautomatic carry pistol, or (c) by old school wheel gun masters like Grant Cunningham.

Cunningham excepted, we often seem to underestimate the lethal potential of revolvers. And WE most definitely includes the authors of this article. In fact, they are so hell-bent on establishing the danger of semi-automatic pistols over revolvers that they cannot even read their own findings correctly. (Recalling my last post on the importance of being truth advocates over political advocates.)

Using police records on fatal and non-fatal handgun assaults in Jersey City, NJ from 1992 through 1996, the authors results are summarized in the two figures below. (I wanted to present them side-by side for ease of comparison, but didn’t have time to do that, sorry.)

Figure 1 shows the results for SEMIAUTOMATIC HANDGUNS. Following the tree from threat to death, bottom to top, we see that in 57.58% of attacks, the victim was injured. This is virtually the same proportion as those attacked with revolvers: 56.34% (Figure 2 below).

Of those injured, 15.79% of those assaulted with semiautomatic pistols died. But the fatality rate for revolvers is actually almost 60% HIGHER: 25% (Figure 2 below). 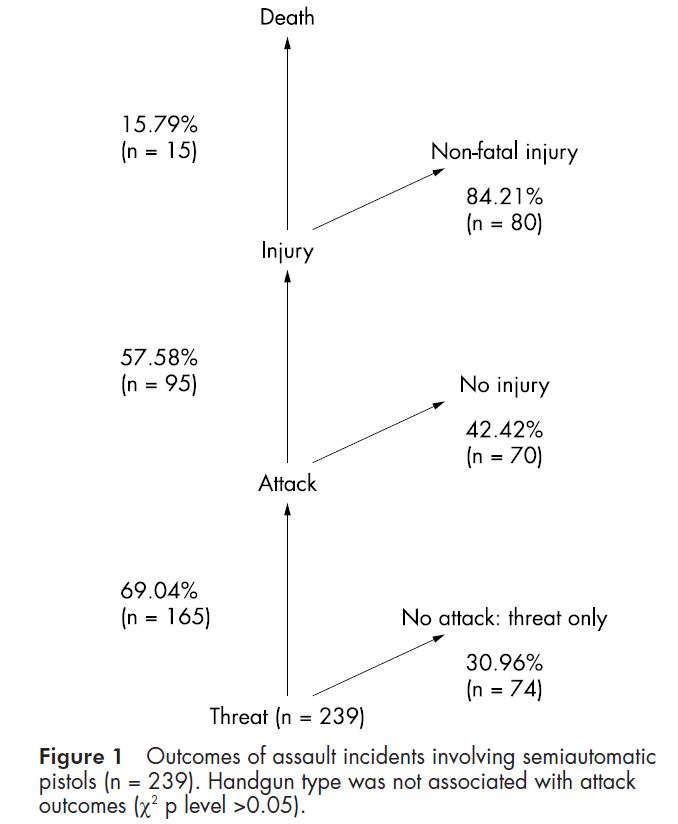 Respect to the authors for reporting what the data actually show. That is social scientifically responsible. But because the findings depart from their expectations, they go through all sorts of efforts to try to explain how semi-automatic pistols really are more dangerous. 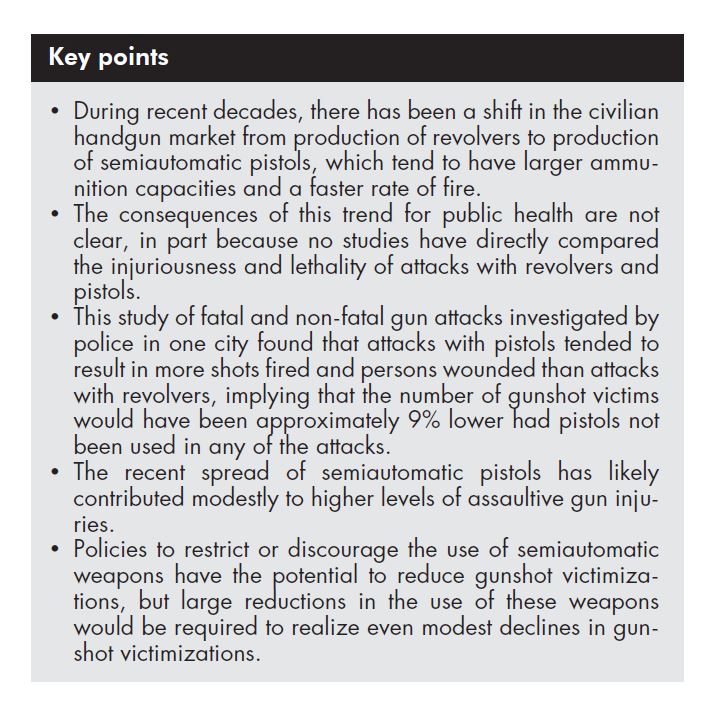 They conclude: “the number of gunshot victims would have been approximately 9% lower had pistols not been used in any of the attacks.”

Even their basis for explaining how much worse semi-autos are than revolvers is suspect. As seen in Table 2 below, the average number of gunshot victims per incident was 1.15 for semi-autos and 1.0 for revolvers. The difference is statistically significant, but is it substantively significant?

Although the difference is not statistically significant, the average number of wounds per gunshot victim (1.5) is actually higher than that of semi-autos (1.44). 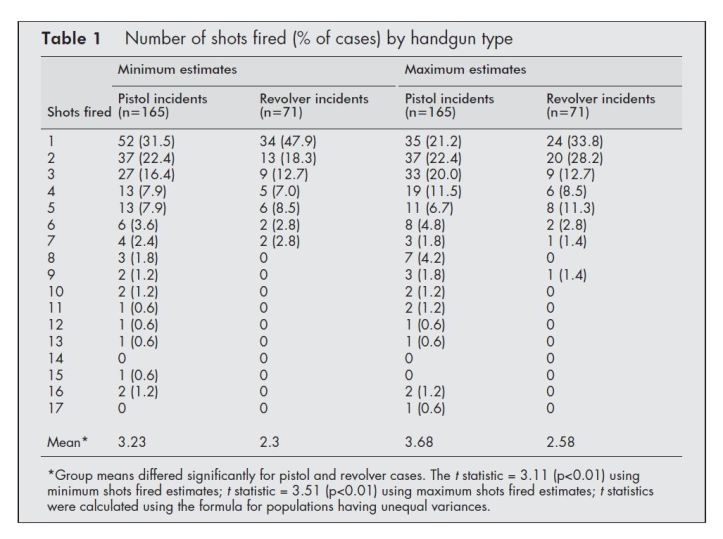 So, basically one more shot per incident on average for semi-auto pistols than revolvers. Not exactly a hail of gunfire in either case, and certainly not a major difference between the two gun action types.