On the Modern Technique of the Pistol, Simply and (Somewhat) Briefly

If you take the Gunsite Academy 250 Defensive Pistol Course, “The Gunsite Experience,” you will learn the founding curriculum as codified by Col. Cooper, the Modern Technique of the Pistol.

Cooper makes no claim to “inventing” the Modern Technique. Rather, he codified it based on observations he made of the Bear Valley Gunslingers who he credits as the “originators” (Foreword to The Modern Technique of the Pistol by Gregory Boyce Morrison, 1991, p. x).

Although he came from a military background and other prominent early originators were LEOs (Jack Weaver, Elden Carl, John Plahn), Cooper emphasizes “that the Modern Technique of the Pistol is a completely civilian development and not a product of either the police or military establishment.”

It is not only the core of the curriculum at Gunsite; it also animated the founding of the International Practical Shooting Confederation (IPSC) (Modern Technique, p. ix).

Although the Modern Technique of the Pistol was originally limited to five elements (Weaver Stance, Flash Sight-picture, Compressed Surprise-break, Presentation, Heavy-duty Self-loading Pistol), I am interested here in what Cooper came to elaborate over time and what the American Pistol Institute came to embody.

In its elaborated form, the Modern Technique of the Pistol is composed of three parts known as the “Combat Triad”: Mindset, Gunhandling, and Marksmanship. Cooper famously elaborated each part of the combat triad over time.

What Cooper called the “Combat Mind-Set” or “mental conditioning for combat” includes the color codes of personal awareness and the seven principles of personal defense outlined in his book by that title.

In addition to loading/unloading and clearing malfunctions, gunhandling incorporates Cooper’s famous four Rules of Gun Safety as well as the four Conditions of Readiness of self-loading pistols.

The coin I purchased to benefit the Jeff Cooper Legacy Foundation continues to reflect the three parts of the Combat Triad and the DVC principles of marksmanship.

The Modern Technique of the Pistol can be put in outline form, as follows. (Note: As WordPress limits my ability to create a hierarchical outline, I have saved the outline also as a PDF for those interested.)

a. Color Codes of Personal Awareness

i. White: unaware and unprepared

b. Principles of Personal Defense

i. All guns are always loaded

ii. Never let the muzzle cover anything you are not willing to destroy

iii. Keep your finger off the trigger until your sights are on the target

iv. Be sure of your target

b. Conditions of Readiness (Carry) for Self-Loading Pistols

i. Zero: round in chamber, hammer cocked, safety disengaged

ii. One: “cocked and locked” = hammer cocked, round in chamber, and safety engaged

iii. Two: hammer down and round in chamber

iv. Three: magazine loaded but no round in chamber

v. Four: magazine separate from gun and no round in chamber

a. Proper balance of principles (DVC)

b. Elements required to achieve balance of DVC

Of course, this is a simplification of the elaborated version of the Modern Technique. In the book by Gregory Boyce Morrison, the production of which was overseen by Cooper, the Weaver Stance (3.b.i) and Presentation of the pistol (3.b.iv) are covered under the Gunhandling part of the Combat Triad. Only the Flash Sight-picture (3.b.ii) and Compressed Surprise-break (3.b.iii) are treated in the book under Marksmanship.

Also, where to put the “Heavy-duty Self-loading Pistol” (3.b.v) is also a bit of a question because, in Cooper’s view at least, it is a constant not a variable.

It reflects the “Power” (Vis, “wounding potential”) element of the DVC triad (3.a.ii), and “is the easiest to deal with. One should opt for the weapon and caliber combination which provides for the greatest likelihood of incapacitation. Once established, power provides a ‘constant’ in the triad” (Modern Technique, p. 85). 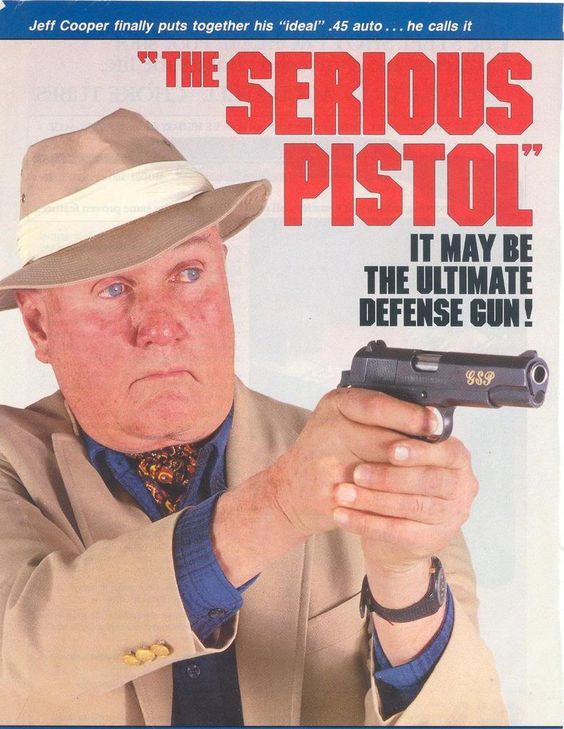 It’s no surprise to anyone who knows Cooper that the right combination is a 1911 chambered for the .45 ACP cartridge (or a Bren Ten in 10mm). In a separate chapter on “The Colossal Cartridge Controversy,” Boyce/Cooper answer the question of the right caliber simply: “Cartridge choice must rationally lean toward the large-bore handguns . . . If you have a choice in the matter, and still believe in the superiority of the smaller over larger – or their equality – your assumptions contradict the facts” (Modern Technique, p. 101).

It is worth noting that of all these elements of the Modern Technique of the Pistol, Power (Vis) is the only one that is actually inherent in and limited by the pistol itself as a mechanical tool. The others are influenced but not determined by it. Once you factor out that constant, “The balance of speed and accuracy poses the true challenge” (Modern Technique, p. 85). Or as some call it today, the balance of speed and precision.

And yet gun owners’ spending patterns and what appears in my gun-related Instagram feed are heavily weighted toward the hardware over the software. Robert at the Civilian Gunfighter blog just posted about this very point this morning.